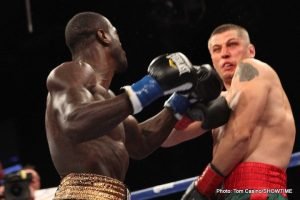 Though he engaged in a number of big fights with big names, and though he once wore the WBO heavyweight crown and looked, for a time, to be on his way to big things, Siarhei Liakhovich is probably best known to fight fans for his losses – to Shannon Briggs, who knocked him clean out of the ring when trailing on points, and to Deontay Wilder, who scored an especially scary-looking KO win over “The White Wolf;” leaving him violently convulsing on the canvas, his body twitching disturbingly.… read full article “Siarhei Liakhovich Looked To Be On His Way To Big Things; What Went Wrong?”

On April 1, 2006 Sergei Liakhovich, in Cleveland Ohio, scored a unanimous victory over Lamont Brewster to capture the WBO Heavyweight Championship. It was a dream that came true. However; dreams never last forever. He would lose the title 7 months later in Phoenix, Arizona at Chase Field to Shannon Briggs in a dramatic slugfest that saw Briggs knock Liakhovich out of the ring ending any chance of Sergei retaining his title.… read full article “Q & A with Sergei Liakhovich & Much More” SCOTTSDALE, Arizona (August 15, 2013) – Former World Boxing Organization (“WBO”) Heavyweight Champion Sergei “The White Wolf” Liakhovich is filing a formal protest, regarding the final outcome of his fight last Friday night against undefeated Deontay Wilder, due to illegal punches that led to him being knocked out at 1:43 of the first round at Fantasy Springs Casino in Indio, California.… read full article “Liakhovich protesting outcome of Wilder fight due to illegal punches” 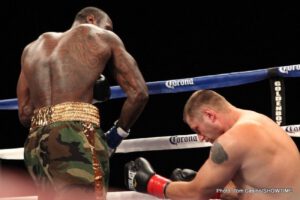 Undefeated Deontay Wilder says two prayers in his dressing room before a fight. One is a team prayer. The other, he says, is for his opponent. Deontay Wilder the 2008 Olympian and most recent US male boxing medalist headlined Showtime’s SHOBOX card from Indio, California and won in style. A sudden and brutal conclusion capped off a quiet first round as a hard right hand sent Siarhei Liakhovich down to the canvas.… read full article “Wilder Blasts Liakhovich but remains untested; Vargas Thrills and Charlo Hammers Away” Deontay, 27, ended the fight with three straight right hands to the head that put Liakhovich down flat on his back on the canvas where he laid with his hands and legs going into a knockout spasm.… read full article “Wilder stops Liakhovich in 1st round”

Undefeated heavyweight Deontay Wilder, most would agree, is a work in progress. He’s not your typical work in progress, however — unless you consider his record of 28-0 with 28 knockouts run of the mill.

Still, the question on most everyone’s mind: Does the former amateur standout and the last male American to medal in the Olympic Games possess the skills and talent to one day became a world champion?… read full article “Deontay Wilder Faces Liakhovich In Headliner Of Friday’s Great ShoBox Card” In the midst of a sizzling summer season of boxing, Golden Boy Promotions will turn up the heat at Fantasy Springs Resort Casino in Indio, California on Friday, August 9 with a ShoBox: The New Generation tripleheader featuring one of the hottest heavyweights in the game, unbeaten knockout artist Deontay Wilder live on SHOWTIME® (10:00 p.m. ET/PT, delayed on the West Coast).

In a 10-round main event, Alabama’s Wilder puts his perfect 28-0 record on the line against former Heavyweight World Champion Sergei Liakhovich. In the co-featured bouts, unbeaten lightweights Francisco Vargas of Mexico and Cincinnati’s Brandon Bennett meet in a 10-round match-up and Houston’s undefeated Jermall Charlo risks his unblemished record against Miami veteran Antwone Smith in a 10-round junior middleweight bout.