Undefeated welterweight contender Sammy “The Sergeant” Vasquez is just over a week away from facing the toughest opponent of his career and he took time out of his camp to give an update on training and more.

Undefeated rising star Sergeant Sammy “The Who Can Mexican” Vasquez (20-0, 14 KOs) will square off against Los Angeles-native Aron Martinez (20-4-1, 4 KOs) in a welterweight showdown as part of the inaugural Premier Boxing Champions (PBC) on FOX and FOX Deportes Saturday, January 23 from STAPLES Center in Los Angeles.

Philadelphia, PA – Popular lightweight Victor Vasquez, of Philadelphia, hopes to extend his modest three-fight winning streak when he takes on Tyrell Samuel, of Baltimore, MD, in the six-round semifinal as part of the Puerto Rican Boxing Classic on Friday evening, Oct. 2, at the 2300 Arena at 2300 South Swanson Street.

The event will air live from the California University of Pennsylvania Convocation Center in California, PA. with televised coverage beginning at 9 p.m. ET/6 p.m. PT. 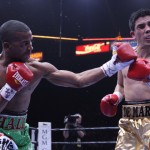 PITTSBURGH, PA. (Feb. 21, 2015) – Sammy Vasquez put on a show for his hometown fans in Pittsburgh, winning a near-shutout 10-round unanimous decision (99-91 twice, 100-90) over Emmanuel Lartey in the main event of ShoBox: The New Generation on Friday, Feb. 20 from CONSUL Energy Center.