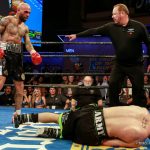 The Brooklyn-native Collazo started slow as Vasquez Jr. looked to control the fight with his movement and jab. The action began to pick-up in the third round as Collazo struck the first major blow of the fight, connecting on a right hand that sent Vasquez Jr. to the canvas. 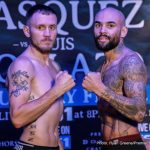 This Thursday night the PBC on FS1 presents a fight card with depth beyond the main event between once beaten Sammy Vasquez and gate keeper Luis Collazo. It’s not as though the top of the bill isn’t important to each man’s career but you could make an argument the undercard has just as much on the line. Yordenis Ugas takes on Levan ‘The Wolfman’ Ghvamichava, a very fitting nickname when you see this guy’s body hair, in a scrap that is crucial at this stage for both. Also, in what I believe to be the opener, Ryan Karl meets Eddie Ramirez in a battle unbeaten junior welterweights. 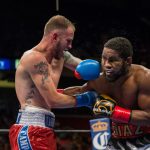 (Photo Credit: Ryan Hafey/Jordan Hardy/Premier Boxing Champions) In a major setback in the career of the previously unbeaten welterweight contender Sammy Vasquez (21-1, 15 KOs), he was beaten tonight by the 5’5″ Felix Diaz (18-1, 8 KOs) by a 10 round unanimous decision at the Legacy Arena in Birmingham, Alabama. The judges scored the fight a 10 round draw initially. However, on a recount of the scores, the judges scored it 96-93, 95-94, and 95-94, for the 32-year-old Diaz. 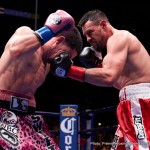 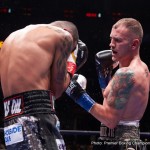 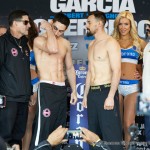 This Saturday night, Danny Garcia meets Robert Guerrero in the main event, live on Fox from the Staples Center in Los Angeles, CA. The co-feature pits hot prospect Sammy Vasquez against hardened-vet Aron Martinez. Can Guerrero rekindle his skill set to trouble Garcia? Can Garcia get a clear win? All these questions and more will be answered on Saturday.

Many of folks across the boxing landscape feel Garcia vs. Guerrero is yet another mismatch coming out of the Al Haymon stable. Perception becomes a reality in this social media world that we live in causing this matchup to fall by the waste side from lack of buzz on fight week. But make no mistake about it this is a real fight, not just an afterthought to get to Amir Khan. 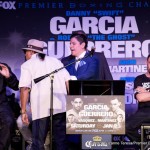 Undefeated welterweight contender Sammy “The Sergeant” Vasquez is just over a week away from facing the toughest opponent of his career and he took time out of his camp to give an update on training and more.