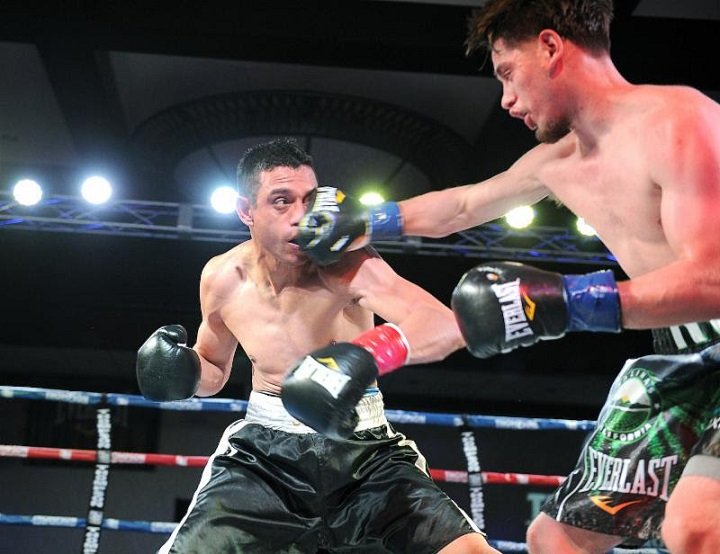 The bout was the co-feature this past Friday night at the Doubletree Hotel in Ontario, California.

Ruben Villa (7-0, 4 KOs), one of the featherweight division’s brightest young talents, takes the next step in his development by clashing with veteran Ernesto Guerrero (26-19, 18 KOs) in one of two highly anticipated match-ups on Friday’s “New Blood” undercard.

Blue chip featherweight prospect Ruben Villa (5-0, 3 KOs) headlines an action-packed “New Blood” undercard when he puts his undefeated record on the line against Anthony de Jesus Ruiz (2-2, 2 KOs) this Friday, May 19, from the Doubletree Hotel in Ontario, Calif.

Thompson Boxing’s 17 year anniversary show will be live streamed on its website and Facebook Live beginning at 7:45 p.m. PDT this Friday.

Highly regarded and undefeated prospects, Ruben Villa and Michael Dutchover will make their East Coast debuts as part of the non-televised undercard before a championship tripleheader on Friday night, April 14th at the MGM National Harbor in Oxon Hill, Maryland.

Southpaw Shelestyuk, who entered the ring ranked No. 9 in the WBO and No. 13 in the WBA, turned back a determined bid by Herrera to win, despite getting docked a point for excessive holding in the fifth round.

Ndongeni, ranked number two by the WBA, will make his U.S. debut against Juan Garcia Mendez (19-1-1, 12 KOs) of Mexicali, Mex. in a fight scheduled for 10-rounds. Ndongeni, a native of South Africa, has won numerous regional titles. He will find himself in unfamiliar territory on Nov. 4, as he has fought all of his professional fights in his home country.