Pittsburgh, PA (November 13, 2014) In addition to telecasting the highly anticipated world class professional event, “The Pride of Pittsburgh II” Friday night on BeIn Sport and a host of other regional sports outlets, Iron Mike Productions announced this evening that the event will be webcast at www.IronMikeProductions.com starting at 9:00 p.m. E.T. FREE of charge.

“We’ve got most of the country blanketed with the Comcast Sports Networks, BeIN Sport and ROOT Sports but we wanted to ensure that all boxing fans across the country could enjoy the telecast LIVE and by webcasting it we’ve ensured that,” said Garry Jonas of Iron Mike Productions.

Pittsburgh, PA (November 13, 2014) In front of a massive crowd of local media and fans, Boxing Legend and head of Iron Mike Productions, MIKE TYSON held court at the Final Press Conference for “The Pride of Pittsburgh II” set for Friday night, November 14 at CONSOL Energy Center.

In great spirits Tyson jokingly asked each fighter to stop thanking him during their time at the podium, “Get the knockout, trust me I’ll come over and thank you tomorrow night.”

Amidst a town engulfed with boxing fever over the best local fight card in decades, Iron Mike Productions has announced a stacked undercard for this Friday night’s, “The Pride of Pittsburgh II” event at CONSOL Energy Center.

“I was in the ‘Fight of the Year’ in August, he was in ‘America’s Funniest Videos.” said lightweight contender MONTY MEZA CLAY when speaking about his upcoming 10-round clash with Pittsburgh cross-town rival, “Lightning” ROD SALKA.

“We’ve known each other for ever and frankly we just don’t like each other, not outside the ring and certainly not inside.” 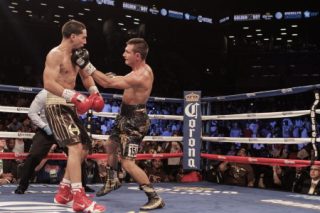 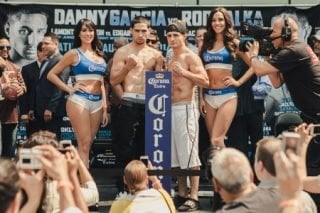 With just days to go until their respective bouts, fighters on the “Danny Garcia vs. Rod Salka” fight card hosted a final press conference Thursday at Barclays Center before they fight this Saturday, August 9.

Joining them were Sadam “World Kid” Ali, Anthony Peterson and Zachary “Zungry” Ochoa, who will fight on SHOWTIME EXTREME® prior to the SHOWTIME telecast and Prichard Colon, who fights in a non-televised bout.