Former world title challengers Youri Kalenga and Roberto Bolonti will do battle in a cruiserweight 10-rounder on the undercard of the Monte Carlo “Night of Champions” tournament on November 7.

MONTREAL, Thursday, December 4th, 2014 – Jean Pascal did not get into a war of words with his opponent at Thursday’s press conference in Montreal, two days ahead of his bout against Roberto Bolonti. The 32-year-old Laval resident chose instead to praise the 35-year-old boxer from Argentina, whom he will fight Saturday at the Bell Centre, during a gala presented by InterBox that will feature eight bouts – including one to be shown on a giant screen. 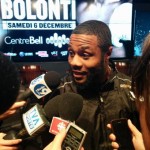 The thirty-two year old Canadian orthodox pugilist has won three in a row since his loss to Bernard Hopkins. Pascal defeated Lucian Bute by way of a unanimous decision in his last outing in January of this year. If he defeats Bolonti, he`s tentatively scheduled to fight World Boxing Association, International Boxing Federation (“IBF”) and World Boxing Organization (“WBO”) Champion, Sergey Kovalev on March 14, 2015 in either Montreal or Quebec City. Pascal`s ranked number one by the World Boxing Council (“WBC”) and WBO, number three by Ring Magazine and number four by the IBF.

(about his decision to not trash-talk Thursday)

“Everything in its time. Everything I do is calculated. People think I’m unpredictable, but my strategies all well-planned with my sports psychologist. Now, for this fight, there isn’t any battle of wills, so there’s no point in trying to intimidate my opponent. We have another plan on the psychological front, but intimidation is not part of it.”

MONTREAL (Dec. 2, 2014) – A strong undercard featuring some of North America’s top prospects has been announced by the event promoter, Interbox, for this Saturday night’s pay-per-view card, headlined by former world light heavyweight champion Jean Pascal (29-2-1, 17 KOs) against Roberto “The Beast” Bolonti (35-3, 24 KOs) in the 10-round main event, at the famed Bell Centre in Montreal.

BOUCHERVILLE, Monday, September 29th 2014 – InterBox is proud to confirm that former IBF Super Middleweight champion (2007-2012) Lucian Bute (31-2-0, 24 KO) will lace up the gloves against recent WBA title challenger Roberto Feliciano « The Beast » Bolonti (35-3-0, 24 KO) on Saturday, December 6th at the Montreal Bell Centre. The undercard portion of the program will be unveiled in the next few weeks.