By Marc Livitz: Apologies are due and professional journalism has been thought through its proper course. The “Big Fights Only” crowd may provide the dollars to tip the financial scales, yet their input as innocent but uninformed bystanders has reached the point of torture akin to water boarding.

Most are able to quickly picture in their minds the ones who continue to bash the sport and its methods of business, yet they are the ones who cannot wait to come invade your couch to see the popular match ups. No different are the individuals who grace our respective TV screens, laptops, mobile devices and the like come Monday morning. They cannot wait to dissect the weekend’s big fights, which in itself means that they only can be counted upon to do as such about three times a year.

This is written from an American’s point of view. More to the point, the opinions and observations offered are based on American sports television. 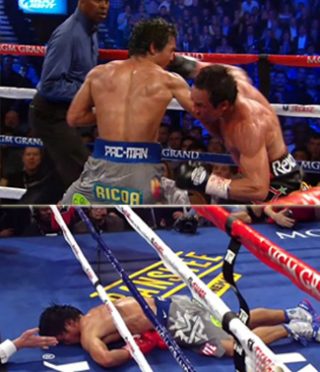 by Geoffrey Ciani – With nearly half his face covered in flowing streams of blood, Juan Manuel Marquez resembled something out of a zombie movie during the sixth round of action in his fourth fight against Manny Pacquiao. Despite suffering a solid third round knockdown from a sneaky Marquez right, Pacquiao seemed to have momentum on his side after scoring a nice knockdown of his own in the fifth. This came compliments of a sharp Pacquiao left that buckled Marquez to the point his glove bounced off the canvas in a spontaneous effort to reestablish balance. Pacquiao turned up the heat following the knockdown and began growing bolder throughout the sixth, and all the while Marquez was patiently trying to fend off Manny’s attacks while looking for something in Pacquiao’s rhythm he could exploit. And then it happened, he found it—BOOM!—fight over, just like that!

Pacquiao never even saw the punch coming. It was a tremendously calculated right hand that Juan threw with meanest intentions, and Pacquiao wound up exactly where Marquez anticipated he would be before even launching the thunderous knockout blow. Watching Pacquiao fall face first onto the canvas, and then remaining there motionlessly with his right arm partially under his body—it was something that was simply surreal. In terms of the sheer brutality of the knockout, it was surely right up there with Antonio Tarver’s second round knockout against Roy Jones and Sergio Martinez’s bomb against Paul Williams. It even was eerily reminiscent of the devastating shot Pacquiao finished Ricky Hatton with more than three years ago. But watching an icon like Pacquiao collapse as if he had been shot at close range in a sneak attack by a stealth assassin was just one of those moments that will forever live on in the annals of boxing history. It actually reminded me of watching a dazed Mike Tyson helplessly groping for his mouthpiece after being absolutely bludgeoned by Buster Douglas. That was the power and magnitude of the imagery on display.

by Sam Kirton: Manny Pacquiao, 10 time world champion, was knocked out last night by a devastating right hand delivered by Marquez in the sixth round of their fourth fight. Pacquiao said he would be happy to have a 5th fight with Marquez. This may worsen the chances of Pacquiao fighting Mayweather considering that Mayweather easily beat Marquez and Marquez had just knocked out Pacquiao. I think that going into a 5th fight together Marquez should get the higher pay than Pacquiao even though the money doesn’t mean much to them anymore.

Manny Pacquiao: “I Am Fine”

LAS VEGAS, NEV. (December 9, 2012) – Following his knockout loss to Juan Manuel Márquez, Fighter of the Decade MANNY ”Pacman” PACQUIAO made a precautionary visit to University Medical Center.,“Manny was given a CT scan and the results were negative,” said Michael Koncz, Pacquiao’s advisor. “We were in an out in just over an hour and Manny was in excellent spirits.”

By Joseph Herron – In an epic fourth meeting between two future Hall of Famers and current pound for pound fighters, Juan Manuel Marquez knocked out Manny Paquiao in the sixth round of their scheduled twelve round fight at the MGM Grand Garden Arena in Las Vegas, Nevada.

In one of the most exciting and memorable fights of 2012, JMM silenced his critics and cemented his legacy as an all-time great fighter by handing the Pac-Man and the general fight public a leading candidate for KO of the year.

The perfectly timed and short, compact right hook landed flush on the chin of Manny Pacquiao at the closing bell of the sixth round, when the soon to be 34 year old southpaw walked right into a punch that he never saw coming.

Until the “Coup de Grace” was delivered by JMM, Manny was winning the fight on every judges’ scorecard; with tallies of 47-46 x 3.

Pacquiao came into the fight with a masterful gameplan that was yielding success for the majority of the contest. Manny was getting the master counter puncher to fire his right hand first and then countering with the straight left by using feints and effective upper body movement. 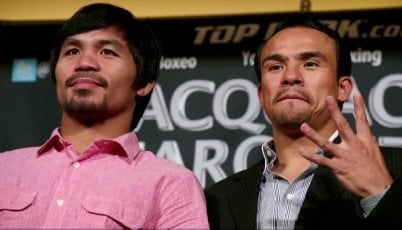 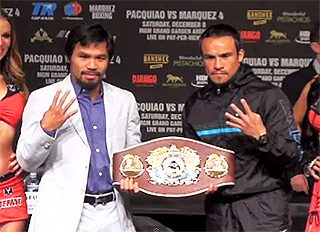 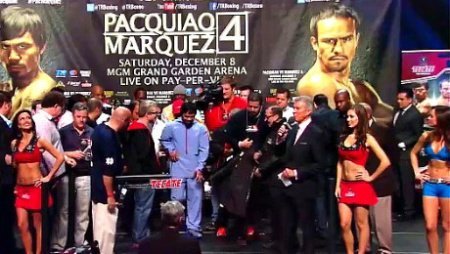