Bringing fight fans closer to the action than ever before, Linacre Media and ULTRACAST will partner to stream Friday’s FIGHTNIGHT LIVE Rosemont Rumble not only live in H.D. on Facebook, but in Facebook 360˚ and in ULTRACAST 360˚ Virtual Reality as well.

CHICAGO — November 23, 2015 — Chicago boxing fans are in for a sensational night of boxing to kick off the holiday weekend this Wednesday at the Horseshoe Hammond, when Hitz Boxing presents a special Thanksgiving Eve edition of its long-running series, Fight Night at the Horseshoe. The stacked card features the return of Mike “Hollywood” Jimenez (18-1, 12KO), who will face Thomas Awimbono (25-4-1, 21KO) in a ten round bout for the NABA Super Middleweight and WBC Continental Americas Super Middleweight titles. It is Jimenez’s first fight in his hometown of Chicago since facing Jesse Hart on the Mayweather-Pacquiao undercard, and going “down under” to defeat Francisco Benitez for the UBF All America Super Middleweight title in June.

CHICAGO — November 5, 2015 — One of Chicago’s favorite sons, Mike “Hollywood” Jimenez, returns to the Windy City on November 25th in the main event at Fight Night at the Horseshoe, the popular Hitz Boxing fight series, where he will compete for the NABA Super Middleweight and the WBC Continental Americas Super Middleweight titles. Jimenez is coming off of a spectacular knockout win over Argentinian Francisco Ramon Benitez, a fight that earned Jimenez the UBF All-American Super Middleweight title. Jimenez’s fight with Benitez, which took place in Victoria, Australia, put Jimenez back in the win column after he suffered a highly-questionable stoppage versus Jesse Hart on the undercard of Mayweather-Pacquiao in May. 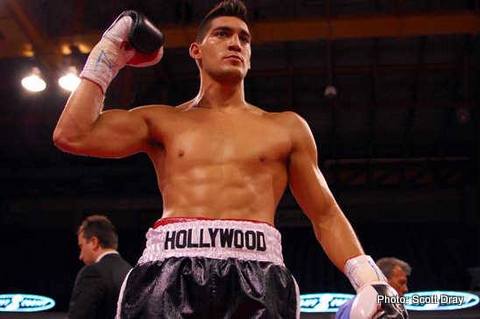 Saturday evening at the Horseshoe Casino in Hammond, Indiana, an intriguing crop of up and coming prospects are featured in a series of four and six-round bouts, followed by an eight-round main event between super middleweights Mike Jimenez and Rollin Williams.

Organized by Hitz Boxing Entertainment, the card should deliver some fireworks from an entertainment standpoint, despite possibly lacking on the competitive scale. Several of the fights appear to be gross mismatches on paper, so fans in attendance could be in for a belated Thanksgiving treat in the form of a few highlight-reel knockouts.

Hitz Boxing marks a milestone next Saturday, November 29th, when it closes out its fifth year of its partnership with the Horseshoe Hammond. A Chicago staple for more than twenty years, Hitz continues its commitment to local boxing, with a stacked card headlined by Mike “Hollywood” Jimenez (15-0, 10KO) vs. Ghanan knockout artist Sena Agbeko (15-1, 15KO). The North American Boxing Association (NABA) Super Middleweight Title will be on the line when the two clash.

“Banner’s Artie Pellulo who I’ve worked with many times in the last twenty years has produced an outstanding fan friendly tournament, “Boxcino 2014” working in conjunction with ESPN.” said Hitz, now in his 25th year of promoting. “We’re thrilled to showcase the first round of this tournament and with the outstanding local talent we’ve added to the show, it’s a terrific evening of sports entertainment.”

Chicago, IL, Saturday, February 1, 2014-The always exciting super middleweight Mike “Hollywood” Jimenez (12-0, 9 KOs) stopped veteran Skylar Thompson (12-11, 10 KOs) with a fifth round TKO in front of a packed ballroom during “Horseshoe Presents: Hitz Boxing’s Fight Night at the Belvedere” in Elk Grove Village, Illinois. Jimenez, who returned to the ring for the first time since his no contest to Derrick Findley (20-12, 13 KOs) in September of last year, looked sharp as he opened his 2014 boxing season.