With 15 years under its belt, featuring world title fights, televised events, and plenty of knockouts, Battle at the Boat has continued to add to its legacy over the past five years.

The longest-running tribal casino boxing series in the United States, Battle at Boat will celebrate its 20th anniversary on June 3 with its 111th edition at the Emerald Queen Casino. This is the final of a four-part series which highlights the history of the series. Parts one, two, and three can be found on halquistproductions.com.

After building a strong fan base during its first five years, Battle at the Boat, which held its inaugural show on July 9, 1997 at the Emerald Queen Casino in Tacoma, Wash., continued to evolve into the premier boxing event in the Northwest in the late 1990s and early 2000s.

The Battle at the Boat cards enjoyed televised broadcasts on SHOWTIME, HBO and ESPN, among other networks and continued to bring in top established and rising talent as it laid the foundation to becoming the nation’s longest-running tribal casino boxing series over this five-year window.

TACOMA, Wash. – Battle at the Boat will celebrate its 20th year on June 3 with its 111th installment. The nation’s longest running tribal casino boxing series has hosted more than 700 fights, with multiple world title bouts, over its two decades.

It’s the premier professional boxing event in the Northwest.

Read moreBattle at the Boat Celebrates 20 Years of Boxing

Gavronski defeated Thomas Awimbono by unanimous decision in the super middleweight main event of Battle at the Boat 108 Saturday in Tacoma, Wash.

The World Boxing Association-NABA United States super middleweight championship will be on the line when Mike Gavronski squares off against Dashon Johnson in the main event of Brain Halquist Productions’ Battle at the Boat 103 on Nov. 7 at the Emerald Queen Casino in Tacoma.

Tacoma, Washington (August 16, 2015) World class professional boxing once again took center stage at the Emerald Queen Casino on Saturday night. Six hotly anticipated bouts made up an incredible fight card that left fans lucky enough to be in attendance with their jaws squarely on the floor.

Read moreTacoma natives Gavronski, Weston steal the show at Battle at the Boat 102

For the fourth time in as many chances, a Battle at the Boat show will see hometown favorite Mike “Imagine Me” Gavronski (17‐1‐1, 11KOs) in their main event slot. Coming off of an incredible night celebrating their 100th show, Battle at the Boat 101 will take place Saturday, May 30th at the Emerald Queen Casino in Tacoma, Washington. 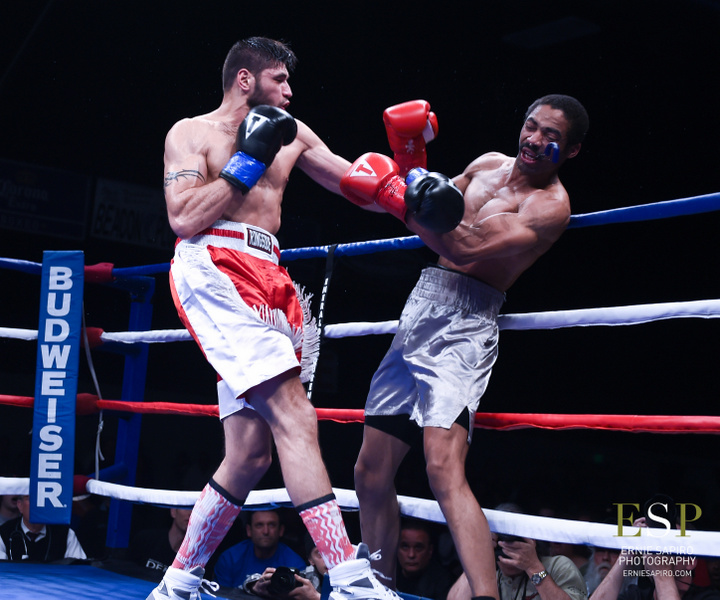 Tacoma, Washington (March 29th 2015) From the moment the opening bell sounded, fans packed into the sold out I-5 showroom in Tacoma knew they were in for a night to remember. With six incredible matchups on the card, Battle at the Boat 100 lived up to the hype. Mixing some razor thin decisions with brutal knockouts, Battle at the Boat lived up to it’s reputation as the premier boxing showcase on the west coast.

Headlining this historic night of fights was Mike “Imagine Me” Gavronski (17-1 11KO’s) taking on Maurice Louishomme (8-2-1 4KO’s) in a 10-round bout. Both men came to fight, as they immediately marched to the center of the ring and began exchanging blows. Back and forth they went, with each fighter scoring a knockdown in the 2nd. As the fight wore on, Gavronski began to find his groove, landing stiff jabs followed by huge right hands to the head. After wobbling his opponent to end the 5th, Gavronski ended things in the very next round, sending Louishomme to the canvas for the final time. The fight marks Gavronski’s third win in row, all coming at Battle at the Boat events.

Tacoma Washington (March 26, 2015) After more than 18 years of showcasing the best up and coming boxing talent the West Coast has to offer along with many televised fights including 11 world title fights, Battle at the Boat’s 100th show is set to kick off this Saturday, March 28th, live from the Emerald Queen Casino in Tacoma, with the first contest scheduled for 7:00PM.

Tacoma, WA (January 10, 2015) A special Friday night edition of Battle at the Boat started off the 2015 fight calendar with a bang. A packed house at the Emerald Queen Casino was treated to a fantastic night of fights, featuring the northwest’s best up and coming boxing talent.