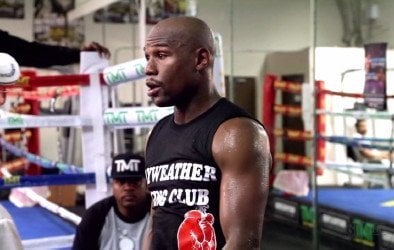 Floyd Mayweather Sr. doesn’t want his son Floyd Jr. fighting the 172 lb. WBA/WBC junior middleweight champion Saul “Canelo” Alvarez (42-0-1, 30 KO’s) at 154 lbs. because he sees the potential of Canelo filling up on water weight in the 24 hours after the weigh-in and coming into the fight weighing well over 170 pounds in their proposed fight on September 14th.

As such, Floyd Sr. is saying that if Canelo wants to fight Mayweather Jr. it’s going to have to be at 147. Canelo will have to prove that he can make that weight before he can get the fight with Floyd Jr. 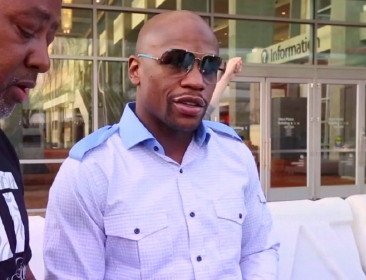 Floyd Mayweather Jr’s team reportedly gave WBA/WBC junior middleweight champion Saul “Canelo” Alvarez the option to fight him at 147 lbs. on September 14th if he wants to get the biggest payday of his career. Canelo is only 22-year-old and has no pay per view history behind him to show that he’s a proven money maker.

Canelo’s not shown yet that he’s someone that can make money, and therefore he’s not position to dictate what weight the fight will take place on. Some of Canelo’s fans think Mayweather is ducking the fight with him by asking him to come down to 147 instead of accommodating the 22-year-old by moving up to 154, so that Canelo can make weight and rehydrate to 170+ the night of the fight and enjoy a 20-25 pound weight advantage over Mayweather. When it gets down to it, Canelo’s only chance of beating Mayweather is to use his light heavyweight-sized weight to crush him. WBA/WBC junior middleweight champion Saul “Canelo” Alvarez hasn’t fought at 147 in the 11 fights dating back to his win over a tiny Jose Miguel Cotto back in May of 2010, but if Canelo wants a fight against Floyd Mayweather Jr. then he’s going to have to find a way back down to that weight because that’s what he’s going to have to do in order to get the big payday fight he’s been harping about for ages.

Let’s be honest about this; Canelo needs Mayweather much more than Mayweather needs Canelo. Mayweather is going to get his $30 million each fight no matter who faces him in his next five fights. Mayweather’s got that guaranteed cash, and besides that he’s already a huge, huge draw. He’s the #1 money fighter in all of sports. According to Steve Kim, Team Mayweather is saying that WBA/WBC junior middleweight champion Saul “Canelo” Alvarez will have to come down to 147 if he wants to fight Floyd Mayweather Jr. on September 14th. There won’t be a catchweight of 150 and Mayweather won’t move up in weight to fight Canelo at his weight of 147.

This now puts it on Canelo and his team whether they want the fight enough for Canelo to melt down 7 pounds from 154 to 147. It’s certainly possible for Canelo to do this because if someone like Julio Cesar Chavez Jr. is able to melt down from 190 to 160 and make weight for his middleweight fights, then Canelo should be able to come down from 172 to 147 to make weight. WBA/WBC junior middleweight champion Saul “Canelo” Alvarez wants and needs a fight against Floyd Mayweather Jr. (44-0, 26 KO’s) in order for Canelo to transition from being just a regular Showtime fighter to a pay per view fighter. However, Canelo expects Mayweather to go back up to 154 to fight him if he says yes to a fight in September instead of Canelo dropping a little weight and fighting Mayweather at 147.

Robert Garcia, the well-known trainer of Brandon Rios and many other fighters, doesn’t think Mayweather should up in weight to fight Canelo because he sees the 22-year-old Mexican as being too heavy for Mayweather.