Terri Harper: I Can Change My Life On February 8 Terri Harper is targeting a life-changing win over Eva Wahlstrom at the FlyDSA Arena on Saturday February 8 when they … Read more

The rematch between Liverpool’s James Jazza Dickens and County Durham’s Martin Ward at the Rainton Meadows Arena on July 27 is now off, with Ward sidelined by a hand injury. … Read more

Ward landed the vacant strap with an impressive eighth round stoppage win over Andy Townend at The O2 in September and the unbeaten Brentwood talent takes his first step towards outright ownership of the coveted Lord Lonsdale belt in his 18th pro fight. 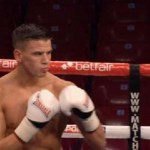 Martin J Ward TKO5 Maxi Hughes – Martin J Ward, 11-0-2 (6KO’s), left no room for doubt second time around as he convincingly halted Maxi Hughes, 13-2-2 (2KO’s), on his stool at the closure of the 5th round of their super-featherweight rematch.

It’s been a long wait for Tony Sims’s charge; he felt he had done enough in the first meeting in December – in which he was controversially down twice – to earn more than the majority draw awarded. 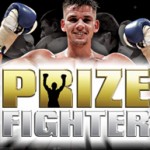 It wasn’t just the gallant Prizefighter lightweights that York Hall was treated to this Saturday night in the hallowed ballroom in the heart of Bethnal Green. Essex based traveller and lightweight prospect Martin J Ward 10-0-1 (5KO’s) was thrust into his first bona fide test against the once beaten and very capable Yorkshireman Maxi Hughes 13-1-1 (2KO’s) a man with his own designs on progression.

Martin J. Ward believes he’ll have too much for Maxi Hughes to handle when the pair meet in a British Super Featherweight title eliminator tomorrow night (December 6) at York Hall, Bethnal Green, live on Sky Sports.

Unbeaten Ward faces the Rossington man at the east London boxing mecca and while he rates his 24 year old opponent, he expects to overpower ‘Maximus’ in the later rounds as he faces his first southpaw in the paid ranks.

Following his sizzling bantamweight debut at Aintree earlier this month, new WBA Intercontinental king Paul Butler has designs on taking the outside lane to a 118lb world title shot.

Already ranked 12th by the WBA, ‘The Baby Faced Assassin’ shall be a keen ringside spectator at the IBF World title spat between north-east rivals Stuey Hall and Martin Ward at Newcastle’s Metro Radio Arena on Saturday 29th March. And don’t be surprised if, post-fight, piston Paul is trying to goad the winner into chancing their arm against him this summer, in what would be another big domestic blockbuster.