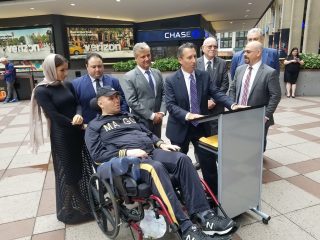 Fight fans may have seen the moving, hard to watch ESPN episode of Outside The Lines that focuses on the case of fallen heavyweight warrior Magomed Abdusalamov. Now, a report from Russian news outlet TASS informs us how a “motivational book” is to be written on “Mago” and his brave battle against the injuries he suffered in his brutal fight with Mike Perez back in November of 2013.… read full article “Fallen Warrior Magomed Abdusalamov’s Story To Be Written In “Motivational Book;” Movie To Follow”

As boxing fans know only too well, the sport has had some rough spells over the past few months, with a number of fighters, brave souls every single one, falling to tragedy. Calls for improved safety measures abound, yet only so much can be done.… read full article “Injured Fighter Magomed Abdusalamov Has Stunned Doctors With His Partial Recovery: “I Feel A Lot Better””

Quietly going about his business in a spectacular yet efficient manner, Russian Magomed Adbusalamov has amassed a superb record undefeated record, with a highlight reel KO that makes him look like a white Mike Tyson.

A standout amateur, Abdusalamov lost to David Price in 2008 before he turned pro. Despite the physical disparities the two are very similar in status, both holding similar record and of similar age, with Abdusalamov also just as good at this stage. The 31 year old is short for a modern heavyweight at just 6ft 3in but he has a compact explosive style. by Pavel Yakovlev, photo: Carlos Baeza – Fres Oquendo is ready for action, and his team is eyeing a showdown with power-punching Magomed Abdusalamov. Recently, Sampson Lewkowicz – Abdusalamov’s promoter — offered to match his fighter with any contender for “a sum of one dollar.” Oquendo’s manager Tom Tsatas is interested. “We accept, but because both guys are so high in the ratings, we want to make it an eliminator for the WBC’s #2 spot,” said Tsatas. “The winner will be in line for a title fight.”

Oquendo definitely wants the bout. “If they can make this fight, it will be a great Christmas gift for me,” he said. “I’ve seen Mago. He’s very strong. He has devastating power. He’s good, but I’m on a higher level. If I beat Mago, my next shot will be against Klitschko.”

In the latest WBC ratings, Oquendo is ranked 12th and Abdusalamov is 10th. Oquendo, a world-rated heavyweight for most of the past decade, has fought twice for world championships. He won three fights this year and has a record of 35-7 (23 KO’s). Abdusalamov, whose record is 16-0 (16 KO’s), is a former two time Russian amateur champion. The 31-year-old Dagestani is known for his pulverizing power: ten of his KO’s have come in the first round. Recently, Abdusalamov stopped former top contender Jameel McCline in two rounds.