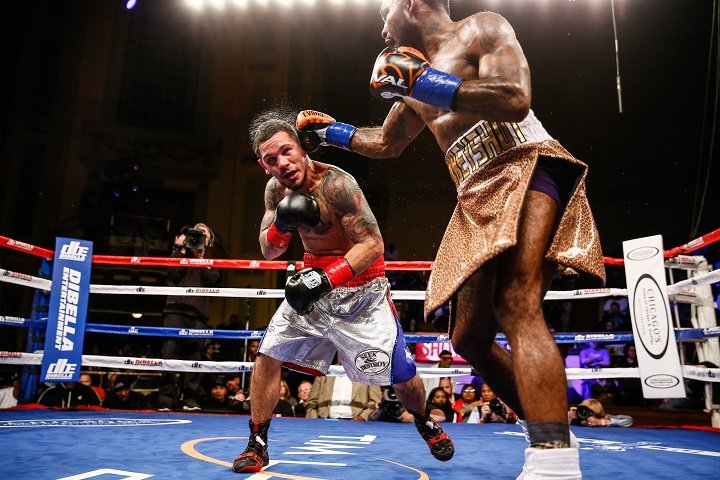 Once-beaten southpaw Yuandale Evans (20-1, 14 KOs) had Cleveland’s fight fans on their feet for the final two dramatic rounds as the East Cleveland boxer earned an exciting, all-action split decision victory over previously undefeated featherweight Luis Rosa (23-1, 11 KOs) in the 10-round main event. Two judges scored the fight in favor of Evans – 96-94 and 97-93 – while the third judge had Rosa winning, 96-94, on Friday night at The Masonic at Templelive Cleveland.

Undefeated featherweight Luis Rosa will face once-beaten Yuandale Evans in a 10-round matchup of 126-pound prospects looking to make a statement in one of boxing’s deepest divisions in the main event of ShoBox: The New Generation Friday, Nov. 10 live on SHOWTIME (10 p.m. ET/PT) from Masonic Temple & Performing Arts Center in Cleveland.

New York, NY (6/6/16) – DiBella Entertainment has promoted some of the biggest and most exciting boxing events at Foxwoods® Resort Casino in the last decade and now, the N.Y. based promotional company is proud to announce that it has partnered with Foxwoods to stage a summer boxing series.

The 24-year-old Puerto Rican New Haven, CT, resident and featherweight contender Luis Rosa, 125½, challenged Mexican veteran German Meraz, 124¾, in a scheduled eight-round bout. Switching between his natural orthodox stance and southpaw throughout the opening frame, Rosa began digging left hooks to the body. He continued to apply pressure and land hooks downstairs weakening Meraz’s legs. The Mexican subsequently began slipping to the canvas throughout the ensuing rounds resulting in a point deduction in round five. It was also in that frame that Rosa felled Meraz with a devastating right uppercut. Rosa scored a second knockdown in the seventh en route to winning a unanimous decision on scores of 80-68 and 79-69 twice. Ranked no. 12 by the WBC, Rosa improved his resume to 22-0 (10 KOs) while Meraz dropped to 48-37-1 (29 KOs).

Rising star Luis “The KO King” Rosa, Jr. has been named by the Connecticut Boxing Hall of Fame (CBHOF) as the Conn. Professional Boxer of the Year for the second year in a row.