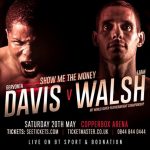 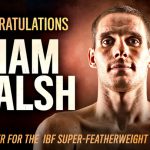 After a cagey opening round the classy Walsh began to take control of the fight, doubling up on his jab and landing some well-timed shots. It was more of the same in the third as Walsh looked the quicker and more agile of the two.

Cromer’s Liam Walsh (20-0; 14KOs) will face Russian Andrey Klimov (19-2-0; 9KOs) in a Final Eliminator for the IBF World Super Featherweight Title on Saturday 8th October at Harrow Leisure Centre. The fight will top an action packed bill promoted by Frank Warren and Andy Ayling which will be televised live and exclusive in the UK on BoxNation.

Cromer’s British and Commonwealth super-featherweight Champion Liam Walsh defended his titles with an eighth round stoppage win over Troy James to retain both his titles on the same night that twin brother Ryan emphatically defended his British title against James Tennyson; another first for British boxing.

Liam Walsh re-surfaces to defend his domestic super-featherweight title at The Copper Box on Saturday but there is a consensus within the industry that he is blessed with a talent worthy of several leagues higher, writes Glynn Evans.

After almost 10 months absent recuperating from a hand injury, top grade Cromer super-feather Liam Walsh intends reminding the fight frat of his quality when he eases back into the fray with a mandatory defence of his British title this weekend, writes Glynn Evans.