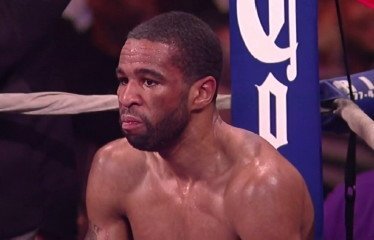 By Bill Phanco: In an impressive performance, IBF light welterweight champion Lamont Peterson (31-1-1, 18 KO’s) retained his IBF title on Friday night in stopping Kendall Holt (28-6, 16 KO’s) in the 8th round at the DC Armory, Washington, District of Columbia, USA.

Referee Tony Weeks stopped the fight after Peterson unloaded with a storm of shots while Holt stood helpless against the ropes futilely trying to block the nonstop rain of shots. The official stoppage was at 1:42 of the round. Peterson put Holt down in the 4th and 6th rounds, and had him hurt in every round from the 4th on.

Peterson
Lamont Peterson hasn’t fought in the past 14 months, but is coming off a huge, albeit controversial win against Amir Khan. He will enter the bout with Holt winning 3 of his last 4, with a draw against Victor Ortiz mixed in.

Holt
Kendall Holt is coming off of a 12 month layoff. Holt has also won 3 of his last 4, with a split decision loss to World No. 2 ranked (WBA/WBC champion) Danny Garcia.

Common Opponent
Both fighters entered the ring to face Timothy “Desert Storm” Bradley in 2009. Holt fought Bradley earlier in the year and almost ended it early with a hook in the first round. He dropped Bradley again in the 12th, but didn’t do enough and lost a decision. by Chip Mitchell: On Friday February 22, 2013, Lamont “Havoc” Peterson defends his IBF Light Welterweight title against Kendall “Rated R” Holt. The fight will be the main event on ESPN2’s Friday Night Fights. Co-promoted by Gary Shaw Productions and Headbanger Promotions, this showcase represents redemption in a way for both fighters, as they each have had taut moments over the past few years. Boxing wouldn’t be the sport that it is today without some form of turbulence.

Lamont Peterson
For Lamont Peterson, it never seems to come easy. He was homeless on the streets of Washington, DC with his brother Anthony for a few years. While some of Lamont’s 12 siblings moved in with friends, Lamont and Anthony moved on to survive alone. They were forced to sleep in bus stations, abandoned cars, or anywhere they could find. Lamont wasn’t even 11 years old during this time. He took the leadership role, as he often fought to protect his younger brother. by James Harrison: February 22nd, IBF light-welterweight titlist Lamont Peterson (30-1-1-15 KO’s) will defend his belt against Kendall “Rated R” Holt (28-5-16 KO’s) at the D.C. Armory. The defense is Peterson’s first after a 14-month layoff. It is also his first bout since the controversial win over Amir Khan in Ring Magazine’s fight of the year in 2011.

Many think Peterson will show signs of ring rust, but it will probably be negated by the fact that Holt is also coming off a long layoff due to shoulder surgery. Besides, a slow start would be characteristic of Peterson.

By Bill Phanco: IBF light welterweight champion Lamont Peterson (30-1-1, 15 KO’s) looks to be finally about to defend his IBF title after having won it over a year ago in defeating former IBF/WBA light welterweight champion Amir Khan in December 2011. Peterson and #4 IBF Kendall Holt (28-5, 16 KO’s) could be facing each other on February 22nd on ESPN2 at the D.C Armory in Washington, DC. 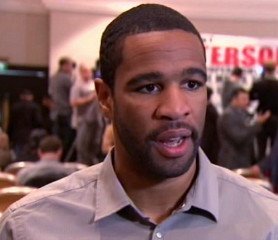 By Joseph Herron – It’s been a rough year for the IBF Junior Welterweight Champion.

On December 10th, 2011, Lamont “Havoc” Peterson (30-1-1, 15 KOs) fought the fight of his life and pulled off the improbable upset over former IBF and WBA 140 pound champion, Amir Khan. Although the DMV based fighter won by way of controversial split decision, Lamont turned a lot of heads with his gritty performance by battling the heavy favorite in a very physical but entertaining contest.

After the highly publicized surprise victory, things quickly went downhill in a hurry for the Junior Welterweight “maverick”.

With no rematch clause inserted in the pre fight contractual agreement, Golden Boy Promotions and Team Khan formally contested the December fight verdict, attempting to either reverse the official fight decision to reflect a “no contest” judgment or strong-arm the newly crowned champ into granting the former title holder an immediate return bout.

Subsequent to much deliberation, the 28 year old fighter eventually decided to turn down an offer made by Bob Arum and Top Rank, Inc. to face Juan Manuel Marquez in Cowboys Stadium, and enter into an agreement with Golden Boy Promotions to fight Amir Khan once again on May 19th, 2012.

One of the stipulations made by Team Peterson during the pre-fight negotiations was a request for random drug testing to be administered by VADA, an anti-doping agency created by longtime Nevada ring physician Dr. Margaret Goodman, sporadically during both fighters’ pre fight preparations.

By Paul Strauss: After conducting its own independent investigation, The International Boxing Federation (IBF) has decided to allow Lamont Peterson the right to defend his Jr. Welterweight title. This of course is in lieu of VADA’s (Voluntary Anti-Doping Association) revelation that Peterson tested positive for a banned substance. As most fans know, the banned substance was testosterone.

By James Slater: I didn’t think it would take long for former 140-pound champ Amir Khan to give his opinion on the recent decision by the IBF to allow Lamont Peterson to retain his position as their 140-pound world champion. Khan, who was controversially out-pointed by Peterson last December, by a Peterson who was later caught taking PED’s, was never going to be happy that the IBF failed to follow the lead of the WBA and strip the admitted cheat.