Vivek W. (ESB): I think Garcia did a very good job and earned the victory, but I would also say lets keep things in perspective. Judah is a solid veteran and one who knows the boxing game as well as most. Sadly for him, execution is another story. The biggest subplot coming into the night for Judah was whether or not he would stay on course after getting touched up a little. What we learned is he would try a bit harder, but in the end it wouldn’t be enough, as again, his effort fell short on the big stage. 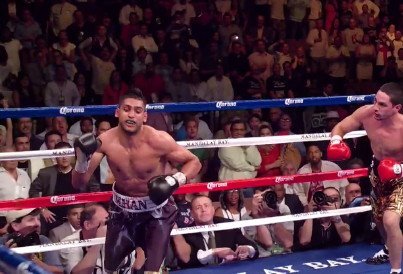 By Michael Collims: Former IBF/WBA light welterweight champion Amir Khan (27-3, 19 KO’s) only has to win one fight against Julio Diaz (40-7-1, 29 KO’s) next month on April 27th to find himself waiting for the winner of the four-fighter 140 pound tournament put together by Golden Boy Promotions.

The winner of the Judah-Garcia & Peterson-Matthysse will face each other in a fight that could take place in the summer. The winner of that fight will then face Khan in November. In other words, Khan only has to fight one each opponent in non-top 15 ranked welterweight Julio Diaz, whereas the fighter that meets him in the finals will have to have gone through two tough fights to get to Khan.

Read moreAmir Khan at the end of the line in 140 lb. tourney By Jeff Sorby: Former IBF/WBA light welterweight champion Amir Khan (27-3, 19 KO’s) will be facing Julio Diaz (40-7-1, 29 KO’s) on April 27th as the co-feature for the Zab Judah vs. Danny Garcia fight in a split-site card on Showtime, according to RingTV. Golden Boy Promotions CEO Richard Schaefer came up with the idea to increase the strength of the two fights put lumping them together.

Read moreKhan vs. Diaz & Judah vs. Garcia in split-site doubleheader on April 27th on Showtime

By Michael Collins: Amir Khan (27-3, 19 KO’s) will be staging his next fight in the UK on April 27th against possibly former IBF lightweight champion Julio Diaz (40-7-1, 29 KO’s). Khan’s team reportedly attempted to get catchweight fights against Vyacheslav Senchenko, Jessie Vargas, Juan Manuel Marquez, Humberto Soto and Tim Bradley, but none were interested.

Read moreKhan to fight on April 27th in UK, Julio Diaz expected to be opponent