Jamie ConlanBelfast thrillmeister Jamie Conlan has been added to the mouth-watering Cardiff Ice Arena show on July 16th. The 29 year-old super-flyweight supremo will box over eight rounds against an opponent to be confirmed, live and exclusive on BoxNation.

Conlan KO8 Nelson in WAR! Tonight at The Copper Box, super-flyweights Jamie Conlan and Anthony Nelson engaged in a fight so fierce, so thrilling, it simply has to go down as 2016’s Fight of The Year thus far into the 12 months. Conlan took Nelson’s Commonwealth title with a body shot KO at 40-seconds of the 8th-round, to improve to 16-0(10), with Nelson, who was making the first defence of the title, falling to 11-1(2) – but the final result does not come close to telling the whole story.

Cromer’s British and Commonwealth super-featherweight Champion Liam Walsh defended his titles with an eighth round stoppage win over Troy James to retain both his titles on the same night that twin brother Ryan emphatically defended his British title against James Tennyson; another first for British boxing. 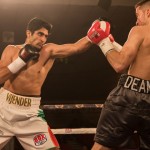 WBO Inter-Continental Super-fly king Jamie Conlan knows a sizzling performance this weekend will propel him into the big profile showdowns.

Super-flyweight stars Jamie Conlan and Paul Butler are heading towards a potential blockbuster showdown next year and the pair will meet face-to-face next month.

Dublin super-flyweight Jamie Conlan, nicknamed “The Mexican”, last night came up against a real and very tough one in Junior Granados (now 13-3-1) at The National Stadium in the City – the world’s only purpose built boxing arena – and survived numerous scares – including 2 hurtful knockdowns – to battle back from the brink and take the fight on scores of 96-92, 95-92 and 95-93.