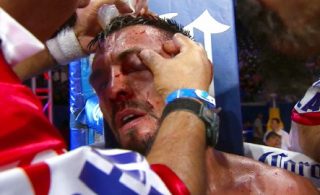 Former two – time world champion, Robert “The Ghost” Guerrero and Japan`s Yoshihiro Kamegai waged a potential fight of the year as both welterweight boxers went after each other for twelve nonstop, action – packed rounds in which Guerrero prevailed with the unanimous decision victory, 116-112 and two scorecards, 117-111, as he dictated the action by landing the crisper and more powerful punches throughout the bout.

This main event and its undercard fights were promoted by Golden Boy Promotions at the outdoor StubHub Center in Carson, California. 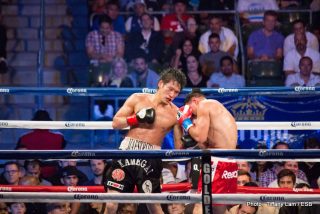 Robert “The Ghost” Guerrero was understandably happy after his victory over Yoshihiro Kamegai at the StubHub Center in Carson. CA, but it was a tough fight. He took a lot of unnecessary punishment, and might need another year off to recuperate!

In Robert’s pre-fight hype, he explained the need for the lengthy time off to take care of things and heal his body. He gushed over his new training program that included lifting weights. He said it was helping him to hit harder, and to be quicker.

So what did he do against Yoshihiro Kamegai? He stood in front of him and trades power shots? What ever happened to “The Ghost”? Where is the guy who boxed Michael Katsidis’ socks off in Apr. of 2011? Robert also did a pretty good job with Selcuk Aydin. when he moved up to welterweight. 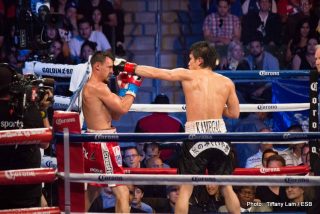 The StubHub Center in Carson, California has become one of the favorite venues for west coast fight fans. Tonight thousands came out for another stacked card from Golden Boy Promotions, with the three signature bouts featured on a Showtime Championship Boxing triple header. Let’s get into the fights.

Both of these welterweights entered the ring coming off loses and in desperate need of a win. Saint Louis native Alexander lost his IBF title via decision last December to Shawn Porter, while Soto Karass was stopped by power punching Keith Thurman later that same month. 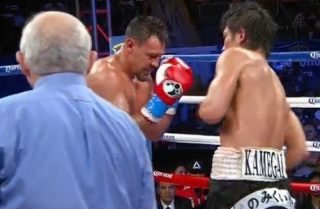 Former two division world champ Robert Guerrero (32-2-1, 18 KO’s) may have misjudged the talent of his opponent Yoshihiro Kamegai (24-2-1, 21 KO’s) tonight because he took a real beating from the Japanese fighter in winning a 12 round unanimous decision on Golden Boy Promotions’ card at the StubHub Center in Carson, California.

Guerrero was hit with a great deal of very, very hard head shots in the fight by the fringe contender Kamegai. As a result of all the punches to the head that Guerrero took, he ended up with a badly swollen eye that was closed from the 9th round on.

CARSON, CALIF. (June 12, 2014) – Legendary basketball coach Jim Valvano once said, “My father gave me the greatest gift anyone could give another person, he believed in me.” The sport of boxing often mirrors that sentiment, as fathers not only believe in their sons, but can also be found in their corners -literally. From recent Boxing Hall of Fame inductees Oscar De La Hoya, Joe Calzaghe, Felix Trinidad and their fathers, to contemporary duos such as Danny and Angel Garcia and Shawn and Ken Porter.

Read moreAs father’s day approaches, Guerrero vs. Kamegai fighters reflect on the importance of their fathers and the impact they have had in their careers

Thanks, everybody, for joining the call today. We are discussing the “Robert Guerrero vs. Yoshihiro Kamegai” undercard and today’s call includes fighters Gary Russell Jr., Vasyl Lomachenko, Devon Alexander and Jesús Soto Karass. It’s quite an exciting undercard, and it takes place Saturday, June 21, at StubHub Center in Carson, California, also live on SHOWTIME CHAMPIONSHIP BOXING®.