With the World Cup Finals on the horizon and summer heating up across the country, the Sport Swami is
gearing up for some hot interviews in the world of MMA and Boxing. This week the Swami welcomes in some rising stars from the world of boxing and MMA to take over the show. Its all this plus TUF 19 Finale & UFC 175 recap only on Wavlite.com Presents LAST CALL on Cyberstationusa.com. This week’s guests include;

New York City (June 24, 2014) Top junior middleweight contenders will square off on the undercard of the “G4” boxing extravaganza set for SATURDAY, JULY 26 at The Mecca of Boxing, Madison Square Garden. “GLEN “Jersey Boy” TAPIA, favorite son of Passaic, New Jersey, will clash with BOYD “The Rainmaker” MELSON of Brooklyn, New York in an eight round battle.

Also added to the undercard is undefeated and all-action junior welterweight newcomer JULIAN “Hammer Hands” RODRIGUEZ of Hasbrouck Heights, New Jersey in a scheduled four rounder against an opponent to be announced. 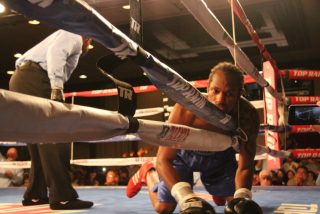 Atlantic City, NJ – Although Glen “Jersey Boy” Tapia (21-1, 13 KOs) made quick work of Keenan Collins (15-9-3, 10 KOs), stopping him early in the first round of Top Rank’s “Solo Boxeo” main event, there was noticeable change in the 24-year-old Junior Middleweight’s attack, patience, and movement.

He wasn’t merely focused on head-hunting or brawling to “please the crowd,” as stated by a candid Tapia in his post-fight interview at the Bally’s Hotel and Casino–which was filled with Tapia fans donning Team Tapia shirts and shouting “Jersey Boy.” Tapia displayed more attention to detail in this comeback effort after suffering his first loss to hard-hitting James Kirkland (32-1, 28 KOs) and a lot of that can be credited to working with Hall of Fame trainer Freddie Roach.

“Freddie demands perfection out of me and whoever he trains. If I do something good he lets me know it’s good, but it needs to be perfect,” Tapia said. “I feel like I’m a smarter fighter now and not just fighting with my heart. I’m actually putting my shots together now and being patient. I’m back and better than ever.” After having endured 21-months of frustration and inactivity (both at least partly brought on by himself), always-exciting southpaw slugger James Kirkland returned to doing what he does best last night in Atlantic City: giving fans of a slugfest just what they want. In brutalizing a brave and previously unbeaten Glen Tapia, Kirkland came back in a quite roaring fashion.

All over Tapia from the opening bell like the proverbial cheap suit, Kirkland gave fans a sizzling value for money performance. Kirkland threw everything at Tapia and expended a ton of energy in doing so. Tapia? he showed a ton of heart in taking all that came his way. In the end though, Kirkland, as he did in that other thriller with Alfredo Angulo, broke Tapia’s heart. Pounding his man in a corner in the 6th-round of a fight of the year candidate, Kirkland would not be denied and referee Steve Smoger had no choice but to dive in.