A pair of cruiserweights hoping to make some noise in the division—Lamont Capers and Garrett Wilson—collide in a six-round fight Friday evening, Dec. 2, at the 2300 Arena in South Philly.
Topping the eight-fight card is a 10-round junior lightweight fight with Tevin Farmer, of North Philadelphia, defending his NABF junior lightweight title against Dardan Zenunaj, of Albania. First fight is 7 pm.

In the main event, Garrett “The Ultimate Warrior” Wilson will take on Anthony Caputo Smith in a 10-round battle for the Pennsylvania Cruiserweight championship. 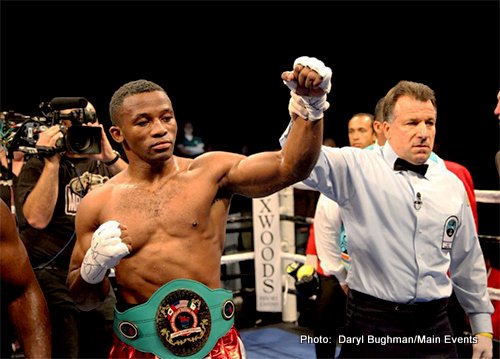 Thabiso “The Rock” Mchunu (16-1, 11 KOs) is a top counter-punching cruiserweight and, on Sept. 20 at Foxwoods Resort Casino, he is facing an opponent in Garrett “The Ultimate Warrior” Wilson (13-7-1, 7 KOs) with a fierce, aggressive offense. Watch out for fireworks when aggression and defense collide in the ring live on NBC Fight Night. Below is the scouting report for this much anticipated battle:

Thabiso “The Rock” Mchunu (16-1, 11 KOs), the South African cruiserweight who burst onto the scene last August with an upset over “Fast” Eddie Chambers at Mohegan Sun returns to Connecticut to defend his NABF Cruiserweight Title against Garrett “The Ultimate Warrior” Wilson as the main event on a special broadcast NBC afternoon edition of Fight Night on Sep. 20 live from Foxwoods Resort Casino.