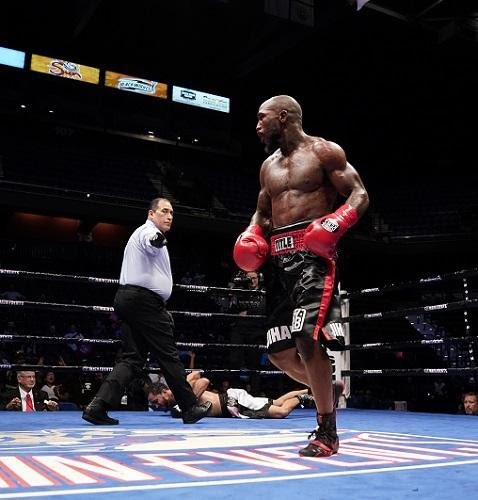 Mohegan Sun’s Rising Stars Boxing Series presented by Main Events completed its third successful installment tonight at the Arena at Mohegan Sun. In the main event, Rising Stars’ middleweight prospect Vaughn Alexander dazzled fans with a heart-stopping battle against local fan-favorite Elvin Ayala. The bout started slow with both competitors feeling each other out. In the fifth round, Alexander began to turn on the heat. In the seventh, Alexander refused to let a bloody broken nose slow him down. He ignored the hometown cheers for Ayala and sent Ayala to the canvas in brutal fashion. The referee stopped the contest at 1:42 of round seven.

Veteran middleweight Elvin Ayala (29-9-1, 13 KOs) has faced some tough competition in his 14-year professional career and his match-up with Vaughn “The Animal” Alexander (10-0, 7 KOs) in the main event of the Thursday, October 5 installment of the Mohegan Sun’s Rising Stars Boxing Series will be no exception. The two are scheduled for a ten-round battle as Ayala looks to prove he is still a force to be reckoned with in the tough middleweight division.

Main Events is proud to announce the next installment of Mohegan Sun’s Rising Stars Boxing Series, set to take place on Thursday, October 5 at the Mohegan Sun Arena in Uncasville, CT. The main event is a ten-round middleweight battle between St. Louis native Vaughn Alexander (10-0, 7 KOs) and middleweight contender Elvin Ayala (29-9-1, 13 KOs). Tickets start at $40 and are available now at Ticketmaster.com and the Mohegan Sun box office. 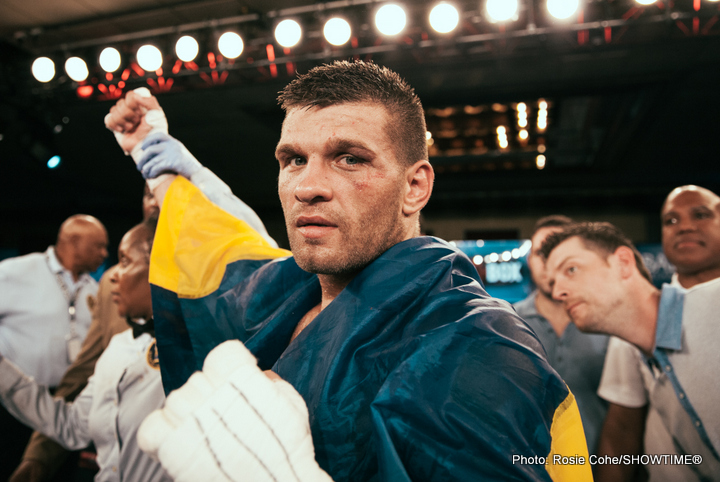 Known as “The Technician,” Derevyanchenko (6-0, 4 KOs/WBS: 23-1, 7 KOs), of Brooklyn, N.Y. by way of Ukraine, kept his record unblemished as he carefully broke down the experienced Ayala (28-7-1, 12 KOs) in their eight rounder. He was the more effective and accurate aggressor, unleashing an excellent body attack and out-landing Ayala 185 to 49 on power punches.

New York, NY / Atlantic City, NJ (8/6/15) – Tomorrow night, stable-mates Sergiy Derevyanchenko (5-0, 4KO’s, WSOB: 23-1) and Ievgen Khytrov (10-0, 9KO’s) will co-headline an exciting night of boxing from the ballroom at Bally’s in Atlantic City, on ShoBox, live on SHOWTIME (10 p.m. ET/PT, delayed on the West Coast). The Ukrainian blue-chip middleweight prospects will be looking to continue their streaks of highly impressive victories when they square off in separate eight-round bouts. Derevyanchenko is set to take on former world-title challenger and resurgent contender Elvin Ayala (28-6-1, 12KO’s) while Khytrov squares off against dangerous Nick Brinson (17-3-2, 7KO’s).

NEW YORK (July 9, 2015) -Boxing returns to the Ballroom at Bally’s Atlantic City on Friday, Aug. 7 with an exciting ShoBox: The New Generation tripleheader featuring the return to the series of Ukrainian blue-chip middleweight prospect Sergiy Derevyanchenko (5-0, 4 KOs, WSOB: 23-1, 7 KOs) as he faces his toughest test to date, former world title challenger Elvin Ayala (28-6-1, 12 KOs) of Reading, Pa. This crossroads battle is scheduled for eight rounds in the middleweight division and will be televised live on SHOWTIME (10 p.m. ET/PT, delayed on the West Coast).

UNCASVILLE, Conn. (Jan. 13th, 2015) — Like any fighter would, Elvin Ayala took some time away from boxing following a devastating loss at the hands of Curtis Stevens in January of 2013.

Looking back on it, Ayala should’ve taken that hiatus long before the bell rang.

By Jeff Sorby: Fighting for the first time at middleweight Curtis Stevens (23-0, 17 KO’s) destroyed Elvin Ayala (26-6-1, 12 KO’s) in the 1st round on Saturday night to capture the vacant NABF middleweight title at the Mohegan Sun Casino, in Uncasville, Connecticut.