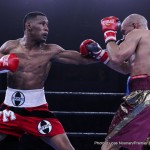 Danny Jacobs (29-1, 26ko) is a fighter I’ve come to admire, and after everything the “Miracle Man” has had to endure outside of the ring as a cancer survivor, last night’s impressive victory over Caleb Truax as part of the PBC broadcast from Chicago, was all the sweeter given it was the first defence of the WBA (reg) title he won last time out against Australian Jarrod Fletcher.

For a man who was once told he may never walk again, Jacobs is a fighter in every sense of the word. Last night in Truax, he came up against a hometown fighter who is as durable as they come. And he did the business in style for me. It was a classy performance, that gave Jacobs the valuable rounds under his belt that he so often is denied due to his power. He’d been 10 rounds just the once, 6 years ago against TMT’s Ishe Smith, taking a UD.

Fight week officially kicked-off Wednesday in Chicago as fighters on the Premier Boxing Champions on Spike fight card participated in the final press conference before entering the ring on Friday, April 24 at UIC Pavilion.

WASHINGTON, D.C. (April 16, 2014) – Middleweight contender Daniel Jacobs is trading in his gloves for a microphone, at least for one night.