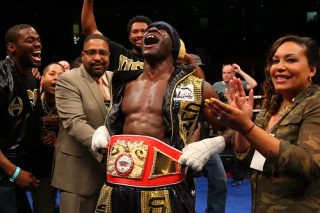 Photos by Rich Graessle and Larry Levanti/Main Events — hiladelphia, PA: Steve “USS” Cunningham (27-6, 12 KOs)* took down the undefeated powerhouse Amir “Hardcore” Mansour (20-1, 15 KOs) via unanimous decision at the Liacouras Center. In the all-Philly main event, Philadelphia-raised Cunningham and Philadelphia-trained Mansour brawled for ten rounds of heart-stopping action that had the entire crowd at the Liacouras Center on their feet and screaming for more. These two warriors just kept coming at each other for ten straight rounds. By the end they were both bleeding and and battle-worn.

Mansour was relentless from the first bell. He kept coming at Steve with huge looping hooks. Cunningham began bleeding in the second round. Then Cunningham cut Mansour over the same eye in the third. 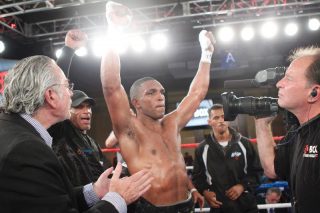 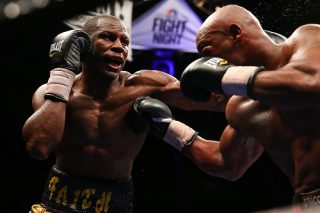 Photo: Rich Graessle/Main Events — The more experienced Steve Cunningham (27-6, 12 KO’s) survived two fifth round knockdowns to go on and beat USBA heavyweight champion Amir Mansour (20-1, 15 KO’s) by a 10 round unanimous decision tonight to win by the scores 97-90, 95-92, 95-92 at the Liacouras Center, in Philadelphia, Pennsylvania, USA.

Cunningham put Mansour down on the canvas in the 10th and final round with a right hand after getting him off balance from a series of rights to the head. Mansour’s left eye was almost closed at the time from the heavy shots he’d absorbed from Cunningham.

There’s a time when even the most protected fighters get the first true test of their careers. There is no comparing Steve Cunningham’s resume, which is deep and full of recognizable names, to Amir Mansour resume. Will Cunningham’s experience and reach advantage be too “hardcore” for Mansour to overcome? We will find out this Friday night from Philly on the NBC Sports Network.

Amir Mansour’s first fight was in 1997, and at age 41 his career is really just getting started after taking over 9 years off from 2001 to 2010. Mansour comes into this matchup sporting an unblemished record of 20 wins with no losses and 15 of those wins coming by way of knockout.

NBCSN presents Fight Night this Friday at 10 p.m. ET featuring a bout between Steve “USS” Cunningham (26-6-0, 12 KOs) and Amir “Hardcore” Mansour (20-0-0, 15 KOs) for the USBA Heavyweight Title from the Liacouras Center in Philadelphia.

Philadelphia, PA: Steve “USS” Cunningham (26-6-0, 12 KOs) has been boxing professionally for almost 14 years and has 32 professional fights under his belt, his opponent USBA Heavyweight Champion Amir “Hardcore” Mansour (20-0-0, 15 KOs) has much less professional experience but honed his boxing skills while serving time in a federal corrections facility and has “Hardcore” knockout power. When these two hometown warriors collide at the Liacouras Center in Philadelphia, PA on Friday, April 4 on NBCSN Fight Night the question on everyone’s mind will be whether or not Cunningham’s experience can overcome Mansour’s power? The scouting report for this heavyweight match-up is below:

Philadelphia, PA: Former two-time world champion Steve “USS” Cunningham (26-6-0, 12 KOs) is no stranger to NBCSN Fight Night. The 37 year old heavyweight has appeared in two of the series’ marquee afternoon editions of Fight Night on the NBC broadcast network. On Friday, April 4th Cunningham will return to Fight Night in his hometown of Philadelphia, PA to challenge undefeated heavy-hitter Amir “Hardcore” Mansour (20-0-0, 15 KOs), making his second appearance on the series, for Mansour’s USBA Heavyweight Title in a ten round battle at the Liacouras Center on the campus of Temple University. The fight is the main event on NBCSN Fight Night beginning at 10 pm ET/7 pm PT.