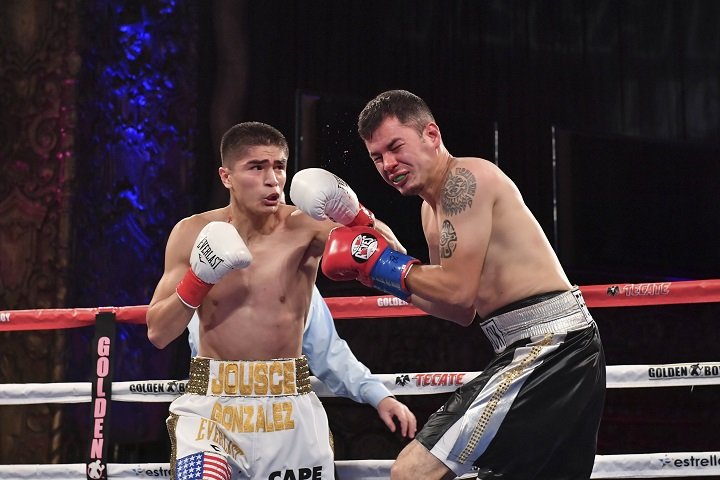 Christian “Chimpa” Gonzalez (18-1, 15 KOs) confirmed yet again that he is one of the best and brightest prospects of the exclusive Golden Boy Promotions stable with a hard-earned eight-round unanimous decision victory against former WBC Super Featherweight Champion Gamaliel “El Platano” Diaz (40-18-3, 19 KOs) of Michoacan, Mexico in the main event of the latest edition of LA FIGHT CLUB at the Belasco Theater in Downtown Los Angeles and televised live nationally on Estrella TV’s Boxeo Estelar. The charismatic knockout artist of Buena Park, Calif. won with scores of 79-72, 79-72 and 76-75 in a tough fight held in the super lightweight division.

Lightweight knockout artist Christian “Chimpa” Gonzalez (17-1, 15 KOs) will seek to confirm that he is one of the brightest prospects of the exclusive Golden Boy stable when he headlines LA FIGHT CLUB for an unprecedented third time against a soon-to-be announced opponent in a scheduled eight-round main event on the Oct. 6 edition of Estrella TV’s Boxeo Estelar.

“In terms of the knockout, I was just listening to my coach and kept boxing,” said Romero. “I fought hard and disciplined myself to not take any lucky punches. I based my strategy in seeing what my opponent was doing and adjusted whenever I needed to.”

Things will heat up at the Belasco Theater in downtown Los Angeles this winter, as Golden Boy Promotions puts on three sizzling fight cards featuring up-and-coming prospects from throughout the Southland region and beyond.

First, on February 3, Golden Boy has loaded up its opening card of the season adding dynamite prospects to the previously announced appearances of Texas sensations Joshua “The Professor” Franco and Hector “El Finito” Tanajara, Jr.

Fighters featured on the December 4 edition of LA FIGHT CLUBheld a special media workout session today ahead of their upcoming bouts at Westside Boxing Gym in Los Angeles. Christian “Chimpa” Gonzalez (11-0, 10 KOs), Oscar “El Jaguar” Negrete (11-0, 4 KOs), Ivan “Striker” Delgado (7-0-1, 2 KOs), and Los Angeles fan favorite Nick Arce (5-0, 5 KOs) were all in attendance showing off their punching power for the press. The fighters talked about their upcoming fights and gave their thoughts on the holiday season, sharing what they are thankful for as they prepare to face their opponents in the ring this Friday. Emilio Sanchez (10-0, 7 KOs) and Joshua Franco (2-0, 1 KOs), fighters not in attendance at today’s event but also featured on the card, were also able to share their hopes for the holiday season.

On December 4, the most popular new boxing series LA FIGHT CLUB will close out 2015 at the Belasco Theater in Los Angeles with the first headlining appearance of local fan favorite and undefeated super featherweight power puncher Christian “Chimpa” Gonzalez (11-0, 10 KOs) in an exciting eight-round main event live on Boxeo Estelar on Estrella TV.

LOS ANGELES (Jan. 8) – Golden Boy Promotions is pushing to make 2015 its best year yet, adding a host of local California talent as well as signing six of the international scene’s top stars to exclusive promotional contracts.