On November 22nd the new kid on the block Chris Algieri (20-0, 8KO) faces Filipino icon Manny Pacquiao (56-5-2, 38KO) in Macau, China. For the past two weeks both fighters and their camps have travelled almost 25,000 miles on an epic worldwide media tour promoting the event. Today’s stop was in Los Angeles, as a sizeable crowd of press and fans gathered at the Hyatt Regency Century Plaza on the Avenue of the Stars.

For Huntington New York native Chris Algieri, 2014 has truly been the year of his life. Back in February he faced the more experienced Emmanuel Taylor on ESPN Friday Night Fights and pulled the mild upset, which earned him a spot on HBO against the feared brawler Ruslan Provodnikov in June. After a disastrous opening round in which he was dropped twice and suffered a gruesome injury to his eye, Algieri bravely fought on and scored a major upset via split decision. In a matter of months the former kickboxer with a master’s degree in nutrition has punched his way from obscurity into the opportunity of a lifetime against Pacquiao. But can he keep the upsets coming? 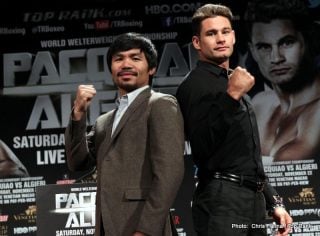 Sept. 3, 2014, Los Angeles,California — “DAY 10” — (L-R) Superstar Manny Pacquiao and New York’s undefeated (20-0) WBO Jr. Welterweight champion Chris Algieri pose during a press conference in Los Angeles on ‘Day 10’ of their worldwide tour. Pacquiao jokingly got up on a chair to make up for the slight height difference.

Pacquiao and Algieri , along with their respective trainers Freddie Roach and Tim Lane, promoters Bob Arum, Joe DeGuardia and Artie Pelullo, and Ed Tracy, President and CEO of Sands China Ltd., are on a 27,273-Mile Media Tour, that began on Monday, August 25 at The Venetian Macao. The 12-day tour includes press conferences or public and private appearances scheduled for Macau, Shanghai, San Francisco, Las Vegas, Los Angeles and New York. 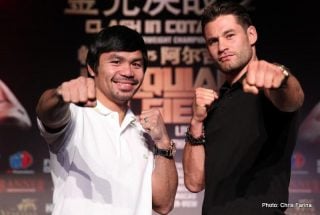 September 4-5 in New York will be Pacquiao’s last media appearances of the promotion in the U.S. He will be training in the Philippines

Dodgers Give Manny Pacquiao the Start For Labor Day Game

MANNY “Pacman” PACQUIAO, boxing ‘s only eight-division world champion, will be serving up the hard cheese when he takes the mound at Dodger Stadium on Labor Day. Pacquiao will be throwing the ceremonial first pitch before the Dodgers vs. Nationals game, This Monday! September 1, at 5:00 p.m. PT. Remaining tickets to the game can be purchased via www.dodgers.com. 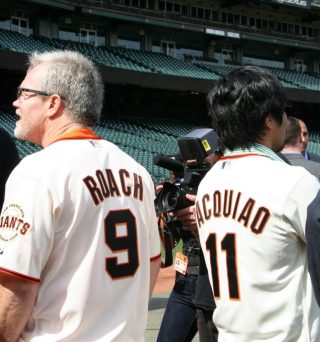 Yesterday, the AT&T Park, home of the San Francisco Giants welcomed team Pacquiao and team Algieri for their the press conference. Both teams were in good spirits, and while neither Pacquiao nor Algieri had anything crowd thrilling to say, there was enough appealing information to make the event worth attending.

Of course the question of Pacquiao vs. Mayweather came up numerous times as expected, but the response from Pacquiao was as default expected. Manny said that he is willing to fight Floyd whenever, and that any great fighter needs to fight other great fighters. Algieri grabbed the microphone and defended Pacquiao, suggesting that fights do not get signed and opponents don’t get picked as easy as the media believes it to be. Chris stated that fighters don’t just get to pick their rivals and fight them, instead claiming that there is a lot more that goes into this process. 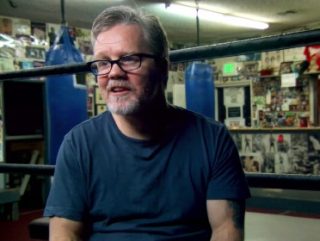 Trainer Freddie Roach recognizes that the bigger and taller Chris Algieri (20-0, 8 KOs) has an excellent jab that will give WBO welterweight champion Manny Pacquiao (56-5-2, 38 KOs) problems when they face each other on November 22nd in Macao, China. However, Roach feels confident that Pacquiao will be able to get past Algieri’s jab in order for him to land his blistering fast combinations.

“Algieri has a good reach advantage and we’re going to have to get past that and his jab. That will be our biggest problem. We have ways to do that,” Roach said. 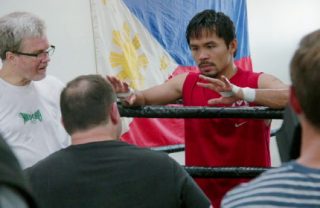