Heavyweight Chazz “The Gentleman” Witherspoon will take on veteran Mike Sheppard in in the eight-round main event on Saturday, March 10th at The Claridge Hotel … read more “Witherspoon – Sheppard in headline bout on March 10th”

Heavyweight Chazz “The Gentleman” will be featured in the main event on Saturday, March 10th at The Claridge Hotel in Atlantic City.

Heavyweight contender Chazz “The Gentleman” Witherspoon (35-3, 27 KOs) is set to headline a historic night of Professional and amateur boxing at the Sun National Bank Center in Trenton, New Jersey on Saturday night. This will be the first actual New Jersey Pro-Am show in the last thirty years and also done by a female Promoter in Renee Aiken of Boss Lady Promotions. The Amateur portion will pit fighters from New York and New Jersey for the first annual Mayors cup. A portion of the proceeds will go to the Ike Williams Boxing Academy of Trenton, New Jersey. Trenton Mayor Eric Jackson will present the trophy to the winners.

Chazz Witherspoon scored his fifth consecutive knockout victory as he took out former world title challenger Mike Marrone in round two of their scheduled six-round heavyweight bout in the main event at the Grundy Arena.

The eight-bout card was promoted by D and D Promotions and Silver Spoon Promotions. 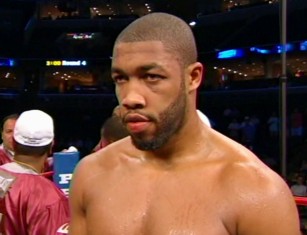 34-year-old heavyweight Chazz Witherspoon, last seen in a ring in a August of last year when he scored a TKO win over an 11-2 Nick Guivas, returns to action tomorrow, against a relatively “safe-looking” foe in the five times beaten Mike Marrone. The big Philadelphian looked for a time like a top prospect/contender, back in 2008, until he ran into Chris Arreola and lost his unbeaten record. There have been other setbacks for the cousin of former two-time heavyweight titlist Tim Witherspoon, such as his stoppage loss to the cagey Tony Thompson and, in a far less acceptable defeat in a fight he was winning, a stoppage loss to Seth Mitchell.

Chazz “The Gentleman” Witherspoon is ready for a big fight against a top heavyweight, but first, he must get past Mike Marrone On Saturday night, as D & D Promotions and Silver Spoon Promotions will present “Rumble at the Rink II” at the Grundy Arena in Bristol, Pennsylvania.

On Saturday night, August 6th, D & D Promotions and Silver Spoon Promotions will present “Rumble at the Rink II” at the Grundy Arena in Bristol, Pennsylvania.

In the main event, heavyweight contender, Chazz “The Gentleman” Witherspoon will take part in a bout scheduled for eight rounds.

On Saturday night, February 20, Heavyweight contender Chazz “The Gentleman” Witherspoon will headline a terrific night of boxing at the Nexxt Level Coliseum in Voorhees, New Jersey.

Atlantic City, NJ (August 14, 2015)–This Saturday night at The Playground in Atlantic City, Heavyweight contender Chazz Witherspoon (33-3, 25 KO’s) will look to further his pursuit at a championship opportunity when he takes on Nicholas Guivas (11-2-2, 9 KO’s) in a 10-round bout that will headline a 12-bout card.

On Saturday night, August 15, Silverspoon Promotions in conjunction with the Atlantic City Boxing Hall of Fame will present a huge night of boxing at The Playground in Atlantic City.