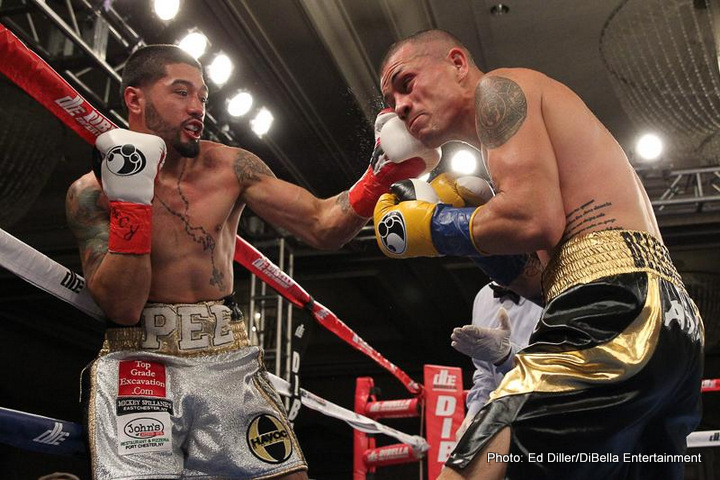 On Wednesday night, DiBella Entertainment staged its popular Broadway Boxing series up north in the suburbs of Westchester County with an exciting card, in front of a passionate and lively crowd at the beautiful Hilton Westchester in Rye Brook, NY.

In the evening’s main event, junior lightweight prospect Bryant “Peewee” Cruz returned for the first time since his ShoBox appearance in December, engaging Mexican Moises Delgadillo in a thrilling eight-round war of attrition. Cruz’ conditioning was key as he overcame a few moments of adversity against a very determined foe, who kept the pressure on throughout. Cruz, 132.8, of Portchester, NY, patiently looked for openings in the first, while countering Delgadillo’s offense with combinations. However, Delgadillo, 132.4, of Jalisco, kept a consistent attack to the body to force Cruz into the trenches.

New York, NY (4/12/15) – Next Wednesday, DiBella Entertainment’s Broadway Boxing series heads back north to the suburbs of Westchester County for the third time in a little over a year. The exciting eight-bout card is scheduled to take place at the beautiful Hilton Westchester in Rye Brook, NY. Headlining the event will be Westchester’s popular junior lightweight prospect Bryant “Peewee” Cruz (16-1, 8KO’s). Also on the card will be the highly regarded undefeated cruiserweight Stivens Bujaj (14-0-1, 9KO’s). Both bouts are scheduled for eight rounds.

New York, NY (6/22/15) – On Wednesday, July 8th, DiBella Entertainment’s Broadway Boxing series will return to the famed B.B. King Blues Club and Grill in midtown Manhattan. The exciting 10-bout card will be the latest installment of the popular and long-running series.

New York, NY (2/20/15) – In front of a sellout crowd of his hometown fans, junior lightweight prospect Bryant “Peewee” Cruz, of Port Chester, NY, headlined DiBella Entertainment’s Broadway Boxing debut on Friday night, in Westchester County, at the beautiful Hilton Westchester, in Rye Brook, NY. Cruz, 130, showed tremendous heart to recover from a knockdown in round two then engage Jorge Pazos, 128¼, of Guamuchil, Sinaloa, Mexico, in a slugfest the following frame. By the midway point of the scheduled eight-rounder, Cruz took back control of the contest, using his jab to set up combinations and outbox Pazos. Showing superior hand speed, Cruz used left hooks to punctuate flurries upstairs. By the seventh round, a bruised Pazos’ face had swelled up from all the punishment he’d taken. After eight exciting rounds, the judges tallied 78-73 twice, and 77-74, all for “Peewee” Cruz, who improved to 14-0 (7 KOs). Pazos dropped to 14-8-1 (8 KOs).

For the first time in its 12-year existence, Broadway Boxing heads north to the suburbs of Westchester County, NY, when DiBella Entertainment (DBE) stages an exciting card from top to bottom at the beautiful Hilton Westchester in Rye Brook, NY next Friday night. The card is headlined by the homecoming of undefeated prospect Bryant “Peewee” Cruz (13-0, 7KO’s) taking on tough-as-nails Jorge Pazos (14-7-1, 8KO’s) in an eight-round junior lightweight matchup. Hailing from nearby Port Chester, NY, just minutes away from the Hilton Westchester, Cruz has quickly become one of the most popular local fighters in all of New York and his legion of fans are expected to come out in droves. This will be the first time as a professional that the hometown favorite will be fighting in Westchester County.