Currently custodian of the WBO European title, the 27 year old south Londoner has bountiful options at both domestic and international title level.

WBO European Welterweight Champion Bradley Skeete will make the first defence his title against Brunet Zamora at the SSE Arena, Wembley, on Saturday 9th May.

The Penge warrior is on the comeback trail and made a stunning return to the ring in February when he destroyed Anzo Gamgebeli inside a round to win the belt and WBO number seven world ranking.

London welterweight star Bradley Skeete says he’ll be fired up to win the Vacant WBO European Welterweight title when he features on the huge O2 arena show on Saturday 28th February, live and exclusive on BoxNation.

Skeete makes his return to the ring in his first fight since his close and controversial points decision loss to domestic rival Frankie Gavin last November in their British and Vacant Commonwealth showdown.

Domestic rivals Frankie Gavin and Bradley Skeete started their war-of-words as they head towards their Saturday 29th November showdown at the ExCeL London.

Gavin defends his British Welterweight title with the Vacant Commonwealth title also on the line, live and exclusive on BoxNation (Sky 437/HD 490, Virgin 546 and Talk Talk 525).

Another fantastic all-British showdown has been added to the big ExCeL show on Saturday 29th November with Frankie Gavin facing-off against rival Bradley Skeete with the British and Vacant Commonwealth Welterweight titles on the line.

Bradley Skeete aims to make it a hat-trick of KO wins when he faces Brazilian Leandro Mendes Pinto this Saturday (20th September) at the York Hall, Bethnal Green, live and exclusive on BoxNation.

After headlining at Bolton’s Reebok Stadium on September 20, Shayne ‘The Pain’ Singleton is eyeing up a potential clash with fellow rising-star, Bradley Skeete. 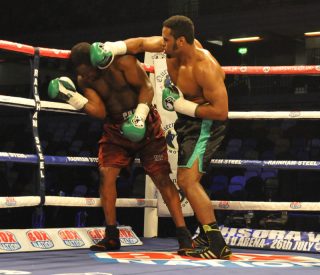 EDDIE CHAMBERS WTKO1 MOSES MATOVU (Time 1:10 of 1st round)
American heavyweight Eddie Chambers lives up to his nickname ‘Fast’ and smashes Moses Matovu inside one round, finishing off the Belfast based Ugandan with a big right hand.