When he enters the ring next Friday, August 14, Polish heavyweight hero Artur Szpilka says he is eager to show off the improvements he has made working with trainer Ronnie Shields.

CHICAGO (June 9, 2015) – A full slate of exciting fights round out a stacked undercard coming to UIC Pavilion in Chicago on Friday, June 12 as heavyweight bruiser and fan favorite Artur Szpilka (18-1, 13 KOs) takes on Manuel Quezada (29-9, 18 KOs) in a 10-round heavyweight attraction.

On November 8, 2014, Polish heavyweights Tomasz “Goral” Adamek (49-3, 29 KOs) and Artur Szpilka (16-1, 12 KOs) meet for the IBF International Heavyweight title in their own backyard at the Kraków Arena in Kraków, Poland. The fight, which will be telecast by Polsat via pay-per-view, is presented by Knockout Promotions, Main Events, and Ziggy Promotions. Ticket prices range from 75 – 5000 zł. 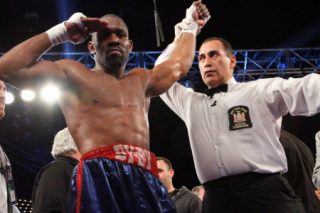 From the opening round Jennings controlled the action with his superior boxing skills and eventually landed a body shot in round six to take a convincing lead in the fight. As the fight moved on, Jennings kept the pressure on Szpilka and ultimately closed the show with a combination that sent the Polish fighter to the canvas in the final round. The referee seen enough and the bout was halted at the 2:20 mark of round ten. HBO’s hit late-night boxing franchise begins 2014 with an all-action doubleheader featuring an intriguing junior lightweight title showdown when HBO BOXING AFTER DARK: MIKEY GARCIA VS. JUAN CARLOS BURGOS AND BRYANT JENNINGS VS. ARTUR SZPILKA is seen SATURDAY, JAN. 25 at 9:45 p.m. (live ET/tape-delayed PT), exclusively on HBO. The HBO Sports team will be ringside for the event, which will be available in HDTV, closed-captioned for the hearing-impaired and presented in Spanish on HBO Latino. Co-promoted by Antonio Leonard Promotions, Philadelphia’s Jennings, currently ranked #5 in the WBA and #4 in both the WBC and IBF rankings, will be returning from a seven-month layoff for this fight.