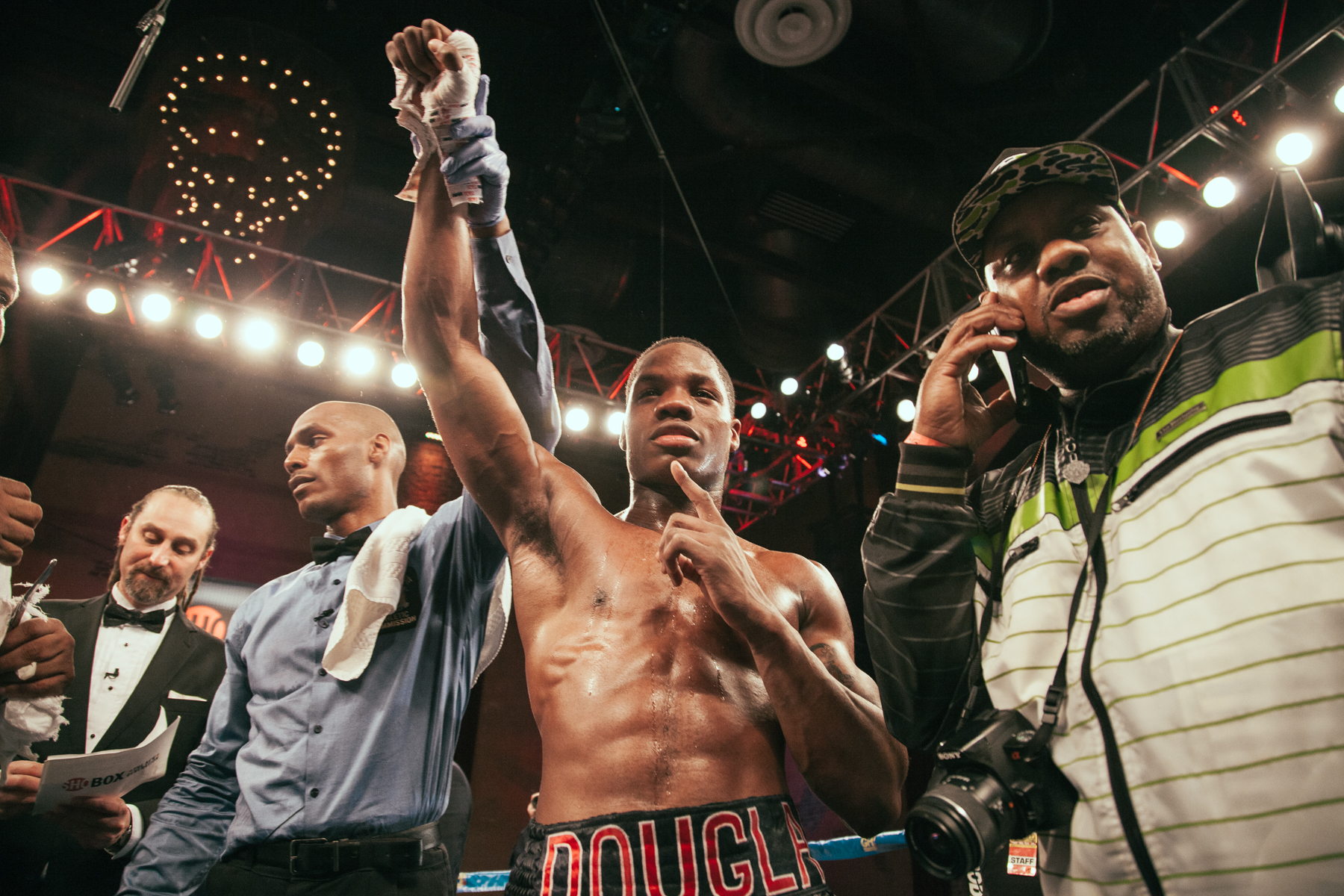 Photo by Rosie Cohen/SHOWTIME® – Talented unbeaten middleweight Antoine Douglas made an impressive 2015 debut thoroughly outboxing previously unbeaten Thomas LaManna before finishing him by TKO at 2:44 of the sixth-round in the main event of a night of knockouts on ShoBox: The New Generation Friday from The Space at Westbury in Westbury, N.Y.

Douglas (17-0-1, 10 KOs), of Washington, D.C., controlled the bout from the opening bell and was the more active and accurate fighter, throwing 127 total punches to LaManna’s 73. LaManna (16-1, 7 KOs), of Millville, N.J., was tough and tried to counter, but wasn’t experienced enough to land anything meaningful against the skilled Washingtonian. Douglas employed a diverse and ferocious attack of uppercuts, hooks and jabs knocking LaManna down twice before scoring the knockout in an exciting win.

Six unbeaten boxers, eight total with a combined record of 105-3-3, will highlight a ShoBox: The New Generation quadrupleheader live on SHOWTIME® (10 p.m. ET/PT, delayed on the West Coast) on Friday, March 13, from The Space at Westbury in Westbury, N.Y.

On Friday night, March 13, at the Space at Westbury in Westbury, New York, three undefeated fighters in the GH3 Promotional stable will all be in action as part of a nationally televised quadruple header on ShoBox: The New Generation.

The show is co-promoted with Greg Cohen Promotions

Parsippany, NJ (November 6, 2014)–On Friday night, December 12, undefeated Middleweight prospect Antoine “Action” Douglas will return to the ring for the 6th time this year as he take part in an 8-round Middleweight bout that will headline a Pro-Am show at the Parsippany PAL in Parsippany, New Jersey.

Somerset, NJ (October 20, 2014)–This Friday night at the Ukrainian Cultural Center, undefeated Middleweight prospect Antoine Douglas (14-0-1, 9 KO’s) will take on tough veteran Jose Medina (18-15-1, 7 KO’s) of Tilton, NH in a eight round bout that will headline a big night of boxing promoted by GH3 Promotions.

The scheduled 8-round bout will be the main event of a card promoted by GH3 Promotions.

Antoine Douglas and Michel Soro fought to a majority draw (96-94 Soro, 95-95 twice) in a bout that was a tale of two halves in the main event of Friday’s ShoBox: The New Generation, live on SHOWTIME® from Turning Stone Resort & Casino in Verona, Calif.

The undefeated Douglas (14-0-1, 9 KOs) dominated the first half of the fight, controlling the action with a plethora of jabs against the vastly experienced former world title challenger. A rip in Soro’s gloves caused a halt in the bout midway through the fourth, but it was more of the same once the bout restarted with Douglas controlling the action.

Soro (23-1-1, 13 KOs) had a solid sixth that gave him a bit more confidence, but as he took more risks it allowed Douglas to land his power shots. A right hand followed by an onslaught of punches from Soro had Douglas dazed in the seventh, but the Frenchman stepped off the gas and allowed Douglas to escape the round. Douglas was still struggling as he entered the ninth for the first time in his career and stayed in survival mode for the remainder of the fight.