Skip to content
In The Battle of Manchester, Anthony Crolla eventually proved to be too much for lightweight rival John Murray. The two men gave their all in a terrific fight that met, even surpassed expectations, but in the end the younger, fresher man pulled out the victory. Dropping Murray with a left hand that landed behind the ear, Crolla then finished his man with a brutal follow-up barrage that prompted the ref to dive in. The time was two-minutes and 20-seconds of the 10th. Murray, who finished the war with a badly swollen and bloodied right eye, is now 33-3(20). Crolla, the younger many by two years at age 27, improved to 28-4-1(11).

From the outset Murray came out hard and fast as expected and Crolla had to dig deep so as not to be overwhelmed. The pace was a hot one straight away and Murray’s vicious and relentless body work was proving effective. Crolla countered well, though, and he landed the cleaner work upstairs. Crolla did look like he was perhaps tiring by the 4th and 5th-round but Murray’s right eye was swelling noticeably.

John Murray says that beating Anthony Crolla will finally earn him the respect he believes his career deserves as the meet at the Phones 4u Arena in their hometown of Manchester on April 19, live on Sky Sports.

The friends meet as rivals in a crunch clash in the Lightweight division, with a rematch for Murray against Kevin Mitchell or a dust-up with former WBO champion Ricky Burns both potential carrots dangled in front of the returning Murray, who is back in the mix after retiring following his World title challenge against Brandon Rios in New York in December 2011.

Murray made it two wins in two since his comeback with a second round stoppage of John Simpson, flooring the rugged Scotsman three times in the round with body shots, but the 29 year old says the reaction to his win has frustrated him.

Anthony Crolla says he will keep up is 100 per cent record in Manchester derbies when he clashes with John Murray at the Phones 4u Arena in Manchester on April 19, live on Sky Sports.

Crolla has boxed in four all-Manchester fights in his career to date, and come out on top in them all. Crolla began his run by stopping former World champion Michael Brodie in 2009 in Brodie’s last pro fight and then won his first title against Andy Morris with a seventh round stoppage in 2010 to claim the English Super Featherweight title.

Anthony Crolla will meet John Simpson at the SECC in Glasgow on March 1, live on Sky Sports. 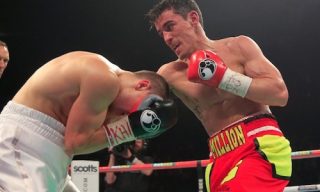 On a lengthy night of boxing from the SECC in Glasgow on March 1st, Anthony ‘Million Dollar’ Crolla will defend his WBO inter-continental lightweight title against John Simpson, live on Sky Sports.

The show’s promoter, Eddie Hearn, announced the bout shortly after the cancellation of the eagerly anticipated fight between Wadi Camacho and Stephen Simmons when a broken rib had forced the latter to withdraw. It was disappointing news as the boxers had each played their part in fueling the passion of the fight in the build-up with heated exchanges on Twitter and plenty of ill-attitude during face-to-face confrontation.

Crolla will enter hostile ground in front of a partisan crowd looking to put on a ‘Million Dollar’ performance against the rugged and relentless Scotsman and hoping to make a statement to WBO lightweight champion Ricky Burns.

In a highly controversial decision, Anthony Crolla (26-4-1,9 KO’s) labored to a 12 round majority over Gavin (37-3-1, 18 KO’s) to grab the vacant WBO Inter-Continental lightweight title at the Bolton Arena, Bolton, Lancashire, United Kingdom. The judges scores were 115-113 and 116-113 for Crolla, and 115-115 even. This was a really strange fight, because I’ve never seen a fighter get out-landed and outworked as much as I saw Crolla, and yet still win the fight. Talk about your controversial decisions.