Corona, California (May 26, 2015)–Memorial Day weekend started out with a bang as Andrey Fedosov and John Thompson were crowned Boxcino 2015 champions in the Heavyweight and Jr. Middleweight divisions with stoppage wins over Donovan Dennis and Brandon Adams this past Friday night at the Omega Products Outdoor Arena.

After 17 years, ESPN Friday Night Fights presented by Corona Extra will celebrate its final show on Friday, May 22, with the highly anticipated finals of Boxcino 2015. The single-elimination, two-weight class tournament featuring eight fighters in both the heavyweight and junior middleweight divisions began in February.

Junior middleweight Brandon Adams (16-1, 12 KOs) is returning to a familiar situation. After coming up short in last year’s Boxcino finals and suffering the only loss of his career, the Los Angeles-native dropped down one weight class and fought his way back to the 10-round championship fight.

Bethlehem, PA (April 13, 2015)
—
Brandon Adams and John Thompson won semifinal bouts in the Boxcino 2015 Jr. Middleweight Tournament while Andrey Fedosov and Donovan Dennis scored impressive stoppage victories in the Heavyweight tournament, as all four punched their tickets to the finals in bouts that took place this past Friday at the Sands Casino Resort Bethlehem. 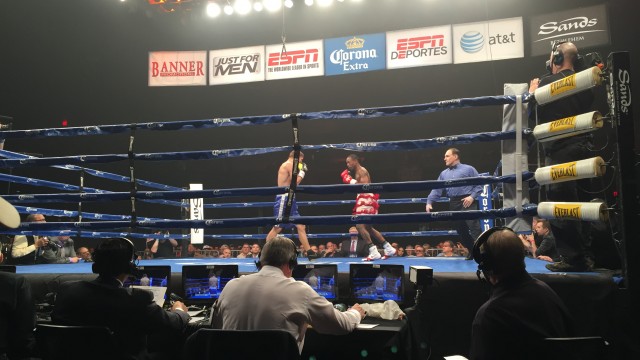