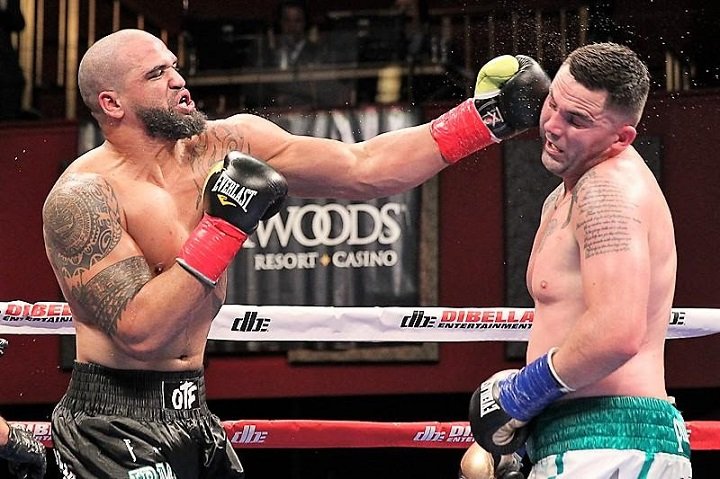 Boxing fans can view all the action live starting at 7:30 p.m. ET by clicking HERE

Included among the commentators for the event are WBC International super bantamweight champion HEATHER “THE HEAT” HARDY along with COREY ERDMAN of SHOWTIME, VICE and Boxing Scene and former world-ranked light heavyweight “ICEMAN” JOHN SCULLY.

The legendary Foxwoods Resort Casino, home to a long history of boxing’s greatest nights, swings its doors open to New England fight fans next Friday, September 15, in an action-packed installment of the acclaimed ”BROADWAY BOXING” series presented by DIBELLA ENTERTAINMENT.

SALEM, NH (April 9, 2016)- Revenge is a dish served better cold, and Alexis Santos savored the sweet taste of his after knocking out Daniel “The Mountain” Martz in the seventh round to capture the vacant IBO International Heavyweight Championship in the main event of the “Heavyweight Showdown” live pro boxing card at Rockingham Park Saturday night.

Those are the words of New England Heavyweight Champion Alexis Santos as his camp tightens the final screws for his eagerly-anticipated rematch with Daniel Martz, and this time the vacant IBO International Heavyweight belt is at stake.

SALEM, NH (April 1, 2016)- Two more exciting match-ups have been added to the under card for the “Heavyweight Showdown”, highlighted by the battle for the vacant IBO International Heavyweight crown between Alexis Santos and Daniel Martz in the main event at Rockingham Park April 9.

There will be plenty of fireworks at Rockingham Park when New England Heavyweight belt holder Alexis Santos takes on Daniel Martz with a division of the WBA Heavyweight title on the line Saturday, April 9.

SALEM, NH (October 3, 2015)- He’s back. Alexis Santos captured the vacant New England Heavyweight Championship with a third round TKO of Arthur Sarabekian in the main event of the live professional boxing card in the Sports Club at Rockingham Park Saturday.

Santos, who returned to the ring for the first time since suffering a devastating knee injury in a fight 16 months ago, celebrated his comeback on a night that also feted the 50th birthday of former WBU champion “Irish” Micky Ward. But it was no party for Sarabekian, a veteran who took the fight on short notice.