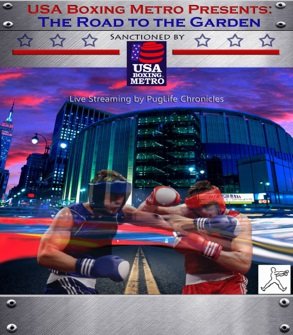 Competitors and fans alike braved the elements as Mother Nature’s “bomb cyclone” struck the area, selling out the first two nights of Metro’s The Road to the Garden event. World champion Iran Barkley and five-time Golden Gloves champion David Villar were amongst the luminaries witnessing the events, along with former New York State Athletic Commissioner Melvina Lathan. Yonkers PAL saw ten exciting bouts in the 152 pound (welterweight) Novice class, with nine going to a decision and one stopped by the referee:

Boston, Manchester (NH) and Springfield (MA) will welcome two of the world’s top amateur boxing teams for friendly duals. Each city will showcase up to 12 bouts, that will all be live streamed, free of charge, on USA Boxing’s website.

This year’s field is stacked with talent, including 2016 Olympic Trials Champion Virginia Fuchs (Kemah, Texas), who will be looking to close out an impressive 2017 year that included four international titles and an undefeated 16-0 record, and two-time World Champion and 2014 Youth Olympic Champion Jajaira Gonzalez (Fountain, Colo.)

USA Boxing’s 2016 Olympic medalists are the pride of their hometowns and two of them will receive honorary parades celebrating their Rio hardware over the weekend. Two-time Olympic gold medalist Claressa Shields (Flint, Mich.) enjoyed a huge welcome celebration upon touching down in Flint on Tuesday and events honoring the history maker have continued across the city. Olympic silver medalist Shakur Stevenson (Newark, N.J.) will be returning to his beloved hometown of Newark on Sunday in time for his parade in downtown Newark while bronze medalist Nico Hernandez (Wichita, Kansas) will continue his victory lap around the city with his parade on Saturday.

Reigning Olympic champion Claressa Shields (Flint, Mich.) is familiar with history making performances and she put on another one in her second gold medal bout on Sunday in Rio de Janeiro. Shields became the first U.S. boxer ever to win back-to-back Olympic gold medals with her third unanimous decision victory of the Olympic Games in the women’s middleweight final with the Netherlands’ Nouchka Fontijn. Shields was so dominant in her second Olympic run that she received the women’s Val Barker trophy given to the Outstanding Boxer of the Tournament.

Shakur Stevenson (Newark, N.J.) and Cuba’s Robeisy Ramirez engaged in another historic USA – Cuba battle in Saturday’s bantamweight finale at the 2016 Olympic Games. The gold medal bout went down to the wire between the two talented boxers but Ramirez’s pulled out the closest of split decisions, giving Stevenson the silver medal.

One of the most highly anticipated bouts of the tournament, the Stevenson-Ramirez showdown lived up to the hype. Both boxers looked to use their strengths in the match-up which featured two of the greatest Olympic-style boxers in the world. Stevenson utilized his range and distance early while Ramirez looked to smother the American boxer. All three rounds were hotly contested but Ramirez took the first three minutes on the judges’ cards. Stevenson turned the judges in the second round, showcasing his boxing skill and landing the cleaner punches to tie the bout up at one round a piece. He started the third round strongly, showcasing his ability to judge distance and catching Ramirez with effective straight shots. As the bout neared the end, Ramirez fired off a combination of punches, none of which connected and Stevenson looked to answer as the final bell rang. After nine minutes of boxing at its highest level, the two boxers waited at the center of the ring for the announcement. The verdict came by split decision and it was Ramirez taking his second consecutive Olympic gold medal.