Read moreDerevyanchenko-Nicklow on 11/14 on Showtime 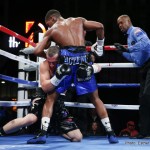 It was cold outside, the temperature dipping into the low 50s, but the elements did not affect unbeaten Antoine “Action” Douglas, however, as the talented world-ranked middleweight turned up the heat and impressively knocked out Les Sherrington in the fourth round in the main event of a ShoBox: The New Generation quadrupleheader Friday live on SHOWTIME.nDouglas (19-0-1, 13 KOs), of Burke, Va., dropped Sherrington (35-8, 19 KOs), of Broadbeach, Queensland, Australia, five times before the one-sided fight for the WBO International 160-pound title was stopped at 1:02 of the fourth. The quick, hard-hitting Douglas dropped Sherrington one time in the first and second rounds, two times in the third and once in the fourth.

All eight fighters that will participate in this Friday, Nov. 6 ShoBox: The New Generation quadrupleheader at the Downtown Las Vegas Event Center have finished their training camps and are ready for the big night of boxing. The four bouts will be televised live on SHOWTIME (10 p.m. ET/PR, delayed on the West Coast). 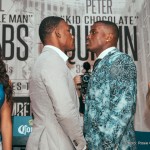 As he nears his Saturday, Nov. 14 showdown against WBC Featherweight World Champion Gary Russell Jr. (26-1, 15 KOs), featherweight contender Oscar Escandón (24-2, 16 KOs) is primed and ready for the challenge. The 12-round SHOWTIME CHAMPIONSHIP BOXING® main-event will be televised live on SHOWTIME (10:45 p.m. ET/PT, delayed on the West Coast), from Hard Rock Hotel & Casino in Las Vegas. The co-main event of the evening will see undefeated super welterweights Frank “Notorious” Galarza (17-0-2, 11 KOs) and Jarrett “Swift” Hurd (16-0, 10 KOs) in a 10-round clash.