Webster Earns 10-Round Unanimous Decision Over Thomas Awimbono in Trenton

Fresh off a dominant TKO victory of Zoltan Sera last month in Philadelphia, Derrick “Take it to the Bank” Webster (21-1, 11 KOs) will make a return to the ring on Jan. 21st at the Sun National Bank Center in Trenton, N.J. Standing opposite him that night will be Thomas Awimbono (25-5-1, 21 KOs), with the IBO Super Middleweight Championship on the line.

“I am extremely excited because it has been a few years since the last time I fought in New Jersey,” the Glassboro native stated. “Just being able to fight back in New Jersey feels good. I really have to take my hat off to the amount of supporters who have already committed to coming out to this fight.” 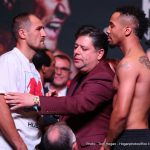 Leading into one of the best-matched world championship fights of recent years tonight in Sergey Kovalev against Andre Ward, the boxing community is buzzing over what will happen in the ultimate pairing of boxer vs. puncher. Not many men can say that they have shared the ring with both fighters, and one member of that elite crew is super middleweight contender Derrick “Take it to the Bank” Webster (21-1, 11 KOs), who has been in separate training camps with each of the two world-class combatants.

Super middleweight Derrick “Take it to the Bank” Webster (21-1, 11 KOs) put on a dominant five-round display on Friday night at 2300 Arena in Philadelphia, dismantling Zoltan Sera (26-11, 17 KOs) of Hungary en route to a TKO victory. The stoppage for Webster, who is represented by DandD Management, came at the 1:28 mark of the fifth frame.

Briston, Penn. – Derrick “Take it to the Bank” Webster (20-1, 10 KOs) made a triumphant return to the ring on Saturday night, pitching a shutout over battle-tested veteran Lenwood Dozier at the Grundy Arena in Bristol, Penn. The bout served as the main event of a card that was presented by the Glassboro native’s managerial team, DandD Management & Promotions.

Glassboro, N.J. (Wednesday, May 18, 2016) – The wait is finally over for fans of super middleweight Derrick “Take it to the Bank” Webster (19-1, 10 KOs), who will make his long awaited return to the ring on Saturday, June 4th, facing Thomas Awinbono (25-4-1, 21 KOs) of Ghana at the Grundy Arena in Bristol, Pennsylvania. The main event bout is also slated for the American Boxing Association (ABA) Super Middleweight championship, with the card being presented by D & D Promotions.

U.S. Army war veteran Shawn “Killa” Cameron (10-0, 5 KOs) of Brooklyn and Bronx native Chris Galeano (9-0, 1 KO) both weighed in under the 157-pound limit on Thursday, setting up a battle of unbeaten fighters for Friday night at the Aviator Sports Complex in Brooklyn. Promoted by DiBella Entertainment, Cameron will be facing Galeano in a 10-round main event that will see the victor claim the New York State Middleweight Championship.

Brooklyn, N.Y. (Wednesday, Nov. 11, 2015) – U.S. Army war veteran Shawn “Killa” Cameron (10-0, 5 KOs) is amid preparation for the biggest test of his professional boxing career to this point, facing fellow undefeated combatant Chris Galeano (9-0, 1 KO) on Friday, November 20th, at the Aviator Sports Complex in Brooklyn. Promoted by DiBella Entertainment, Cameron will be vying for the New York State Middleweight Championship in the 10-round main event pairing.