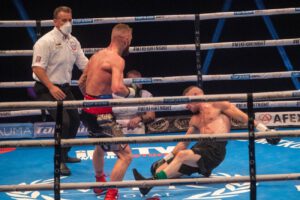 It was a tremendous evening of action as another huge #MTKFightNight event took place – and saw Lewis Crocker stop Louis Greene to become the new WBO European welterweight champion.

The massive event at Production Park Studios in Wakefield was live in the US on ESPN+ in association with Top Rank, and worldwide on IFL TV, and featured several fascinating fights.… read full article “Lewis Crocker defeats Louis Greene – Boxing Results” 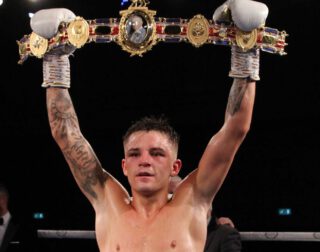 Unbeaten Scottish star Lee McGregor is ready to kick on and achieve big things over the next year – and that starts when he faces Ryan Walker on Wednesday’s huge #MTKFightNight.

British and Commonwealth bantamweight king McGregor (8-0, 6 KOs) steps up to 122lbs to take on former Southern Area super-bantamweight champion Walker (11-1, 2 KOs) on a massive card at Production Park Studios in Wakefield – live in the US on ESPN+ in association with Top Rank, and worldwide on IFL TV.… read full article “Lee McGregor vs Ryan Walker on August 26, LIVE on ESPN+” 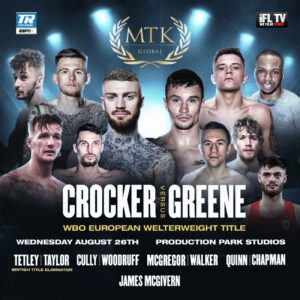 Lewis Crocker has a very simple message ahead of his #MTKFightNight main event against Louis Greene next week: Expect fireworks.

Unbeaten Crocker (11-0, 6 KOs) faces former Southern Area champion Greene (12-1, 7 KOs) for the vacant WBO European welterweight title at Production Park Studios in Wakefield on August 26 – live in the US on ESPN+ in association with Top Rank, and worldwide on IFL TV.… read full article “Crocker vs Greene: #MTKFightNight on Aug. 26 LIVE on ESPN+” 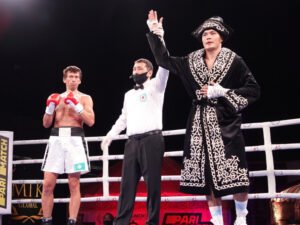 It was a night to remember as a substantial #MTKFightNight event took place in Almaty, Kazakhstan, with highly-rated debutants Kamshybek Kunkabayev and Tursynbay Kulakhmet proving their worth by overcoming dangerous opponents.

The event was broadcast live in the US on ESPN+ in association with Top Rank, in Kazakhstan on QAZSPORT and worldwide on IFL TV, with Kunkabayev and Kulakhmet stealing the show with their elite-level performances.… read full article “Kamshybek Kunkabayev and Tursynbay Kulakhmet both win – Boxing Results” 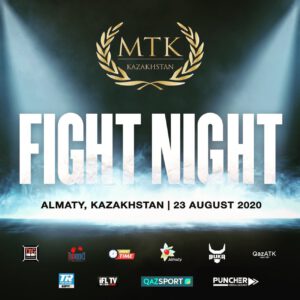 The show will be broadcast live in the US on ESPN+ in association with Top Rank, in Kazakhstan on QAZSPORT and worldwide on IFL TV – and is certain to be another must-see event. 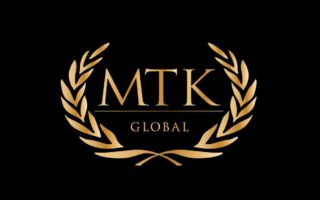 Lorenzo ‘Truck’ Simpson is regarded as one of the best prospects in the world – and you can get to know more about his incredible journey right here.

American sensation Simpson (8-0, 5 KOs) signed with MTK Global earlier this month, with the move met by critical acclaim due to the incredible talents that he possesses.… read full article “Lorenzo ‘Truck’ Simpson Opens Up On Life In Boxing” 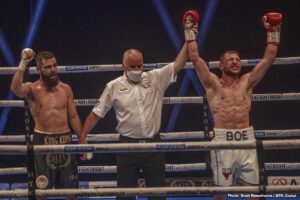 The two men met at Production Park Studios in Wakefield on a packed show that was broadcast live in the US on ESPN+ in association with Top Rank and worldwide on IFL TV, and they treated those watching around the world to a fantastic bout.… read full article “RESULTS: Maxi Hughes Upsets Carroll – #MTKfightnight Results” 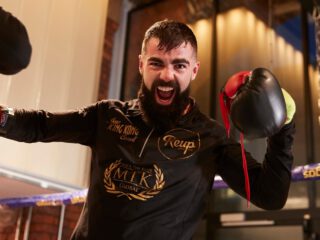 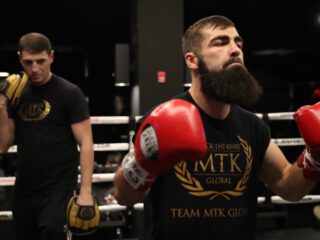 (August 10, 2020) – Midweek boxing comes to ESPN+ this Wednesday with the return of former world title challenger Jono Carroll, who will face off against veteran Maxi Hughes in the 10-round lightweight main event.… read full article “ESPN+: Jono Carroll vs Maxi Hughes on August 12” 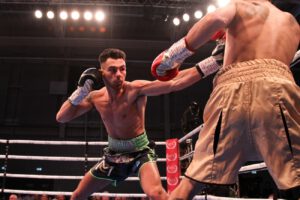 Undefeated Scottish star Craig MacIntyre knows that some huge fights will be on the horizon for him in the super-lightweight division – as long as he can defeat tough rival Ishmael Ellis when a huge #MTKFightNight returns on Wednesday.… read full article “Craig MacIntyre vs. Ishmael Ellis this Wednesday, August 15”