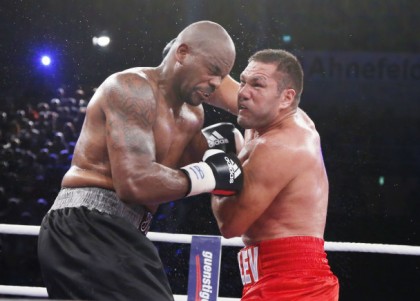 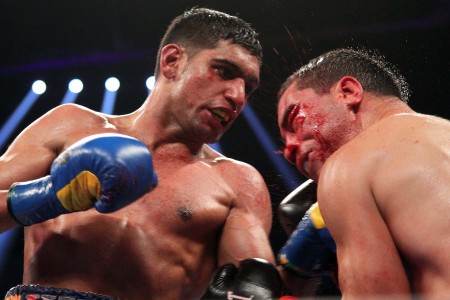 Amir Khan is slated to fight Devon Alexander for the IBF welterweight title on December 7, 2013. Khan has had nothing but title fights since his first loss at the hands of Breidis Prescott. The only exception was his last fight against Julio Diaz which was a non-title bout that Amir got up from a 4th round knock down to win by UD. That makes of 12 fights for different titles and he won 9 of them.

Amir‘s loss to Prescott came in a lightweight title bout in 2008 via first round KO. It was a deep, heavy fall and it didn’t look like Khan could ever beat Prescott. My view then was that Khan wasn’t made for professional boxing despite his stellar amateur career. He bounced back and moved up to light welterweight to have all those high profile fights.

Unlike other high-profile fighters who have a dedicated fan following, Khan has a bandwagon of nay-sayers and very few fans support him even in his own country. He is someone fans love to hate. September 14 is near and “The One” will stand out hopefully without controversy. I am not sure who will be favored by the politics if it comes to that. Floyd was never a KO artist and after moving up in weight he did not bring his punch with him. Saul Alvarez knocking out Floyd Mayweather is not a scenario that pundits would even consider although „Canelo“ seems to hit hard enough. The outcome will probably depend on the judges.

There are labels for matching up different styles like “a boxer vs. a puncher“, “a stylist vs. a brawler“, if I had to label the fight I’d say “a boxer vs. a fighter” but there would be a lot of “fine print“ under that label.

Floyd Mayweather‘s style is unconventional for the pro ranks as it is fundamentally based on the Olympic/amateur boxing style. His amateur boxing skills have been optimized and modified for prize fighting. (photo credit: Main Events) Sergey Kovalev has emerged as a force to be reckoned with and he is like a breath of fresh air. Fans like to see boxers winning decisively beyond doubt and leaving no room for controversy and politics. Kovalev did just that and perhaps established himself as a leading pay-per-view star. Here is a quick breakdown of his winning effort:

Round 1: Not much of initial probing and testing, the differences in their stances reflected the difference in their styles. Cleverly leaned a little forward most of the time smoothly shifting weight between offense and defense. Kovalev had a puncher’s stance and kept his weight on the back foot as a rule but shifted form foot to foot with punches. His footwork was much faster and sharper than Cleverly’s as was his hand speed. His superior range orientation allowed him to keep his guard low and the hands free for punching. His defense relied heavily on counter punching and reflex. He used the jab only as a range finder for his left hooks and right hands. Cleverly did not throw or land anything significant and this would become a worrying pattern for him.