The 26-year-old, fan-friendly McGuinness fought only once in 2013, capturing the vacant NABA featherweight title by way of a unanimous 12-round decision over South American champion Sergio Carlos Santillan (30-12-3). The rugged Irish-Canadian boxer has been mourning the recent death of his manager, Stephen den Elzen. 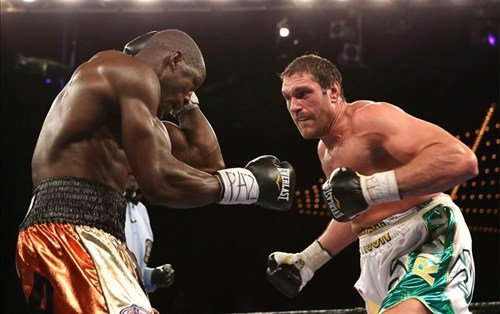 Canadian fans may watch all the action on Fight Network, starting at 4 p.m. ET (1 p.m. PT), while Americans can view on both cable and satellite pay-per-view for a suggested retail price of $24.95 via DIRECTV, iN Demand, DISH, Avail-TVN. Integrated Sports Network is distributing this major British boxing event in the United States on behalf of Fight Network. The 30-year-old Shumenov set a light heavyweight record for capturing a world title in the fewest career fights, 10, when he won (Jan. 10, 2010) a 12-round decision over Gabriel Campillo in Las Vegas. Shumenov’s fifth successful world title defense was an impressive performance over previously undefeated challenger Tomas “Tomi Kid” Kovacs (23-1, 14 KOs) on “Danger Zone,” headlined by Marcus Maidana’s upset of Adrian Broner, at the Alamodome in San Antonio, Texas.

BOSTON (Nov. 23, 2013) – Big Six Entertainment closed its 2013 season on a strong note, featuring its best top-to-bottom card of the year, tonight at The Royale Nightclub Boston (formerly The Roxy).

McCreedy, fighting out of the same hometown as “Irish” Micky Ward (Lowell, Mass.) and his trainer Dicky Eklund, plans to fight as a super middleweight in 2014.

Irag War veteran Chris Traietti (14-3, 10 KOs), fighting out of nearby Quincy, decked Randy “The Rattler” Campbell (3-10, 2 KOs) in the second round. Campbell’s corner stopped the fight when the Ohio fighter was unable to continue after three rounds. Traietti, who notched his fifth straight victory, defeated Campbell 2 ½ years ago by way of a six-round majority decision. The 30-year-old Quillin, fighting out of Brooklyn, is the only top-rated 160-pounder aligned with Showtime. The marquee-name middleweights, Sergio Martinez (WBC/Ring Magazine champion) and Gennady Golovkin (WBA), fight exclusively on rival HBO.

Quillin relishes the opportunity to fight any of the top rated middleweights, but he also understands the politics of boxing and the situation it has presently placed him in. MONTREAL(October 17, 2013) — The World Boxing Council (WBC), The Ring Magazine and lineal World light heavyweight champion, Adonis “Superman” Stevenson (22-1, 19 KOs), has promised to be a spectacular, popular and active champion. He is keeping his word, fighting more impressively with each other victory, as he now prepares for his fourth fight in 2013.

Stevenson’s third world championship fight in a five month period, to air in the United States on HBO®, will be in the main event against his mandatory challenger and the WBC’s No. 1 contender, England’s Tony ‘Bomber’ Bellew (20-1-1, 12 KOs), on Saturday, November 30 at Colisee Pepsiin Quebec City, Canada. The event will televised live on HBO Boxing After Dark, beginning at 10:15 p. m. ET/PT. In the past five-plus months, Quillin has turned 30, married Allison Berger, and started a few businesses (T-shirts and headphones).